Back on dry land, amongst my usual crowd of shallow coral reef ecologists, I would consider my normal line of research to be on the deeper end of the spectrum. During the course of my PhD I have been studying the fish and coral communities found on the top of shallow seamounts and smaller pinnacles rising from the depths to the upper 50m of the sea’s surface. Joining the second leg of the Seamounts, Canyons & Reefs of the Coral Sea cruise on R/V Falkor has brought a whole new perspective to what is deep in the oceans!

Seamounts are ubiquitous across the World’s oceans, but despite many estimates suggesting that there are between 100,000 and 1 million of these abrupt volcanic features, only a handful have been visited, let alone studied. Rising from the ocean floor from thousands of meters, many seamounts are tall enough to reach the surface – and in tropical latitudes like the Coral Sea – provide hard substrate for the formation of coral reefs. Similarly, the steep ridges of canyons which extend along the edge of the continental shelf rise up from the plateau to the fringing reefs of the Great Barrier Reef (GBR). The continuous sloping habitats of seamounts and canyons are an amazing example of how shallow marine habitats are so closely connected to the deep.

As ROV SuBastian makes its way up the slopes of the seamounts and canyons we have been visiting on the cruise, the changes in light, temperature, pressure, and other environmental factors are remarkable. These changes lead to a whole gradient of habitats suitable in different ways for many different species. From the dark and cold soft sediments of the plateau floor to exposed rocky escarpments, fields of mesophotic black corals, and eventually the well-lit realms of the upper slopes and reef crest – there is something for everyone!

My role on board is to assist with biological sampling, documenting observations and preserving specimens that we are able to collect. Being able to film and sample the organisms we encounter on our dives is a hugely exciting way to expand what we know about deep-sea habitats and how species are distributed along depth gradients. Many of the species that we have sampled have not been recorded from the depths we are surveying, meaning that they live much deeper than originally thought. We are also seeing many strange and wonderful creatures on the video stream that are either very rarely seen or potentially new to science. Roll on another dive! 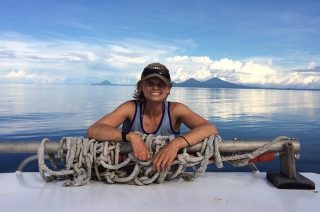