Australia is an island continent, surrounded by three oceans and multiple seas; there are four major ocean currents flowing around the large mass of land. These bodies of water are home to amazing organisms. Yet with so much water, ocean life, and discovery potential, Australia has limited research opportunities. In 2020, R/V Falkor and Schmidt Ocean Institute will be making their way to Australia to study topics such as deep-sea exploration of submarine canyons and in-depth researching of coral ecosystems on all four sides of the continent.

Principal Investigators Dr. Julie Trotter (The University of Western Australia) and Dr. Paolo Montagna (Institute of Polar Sciences), along with their team of interdisciplinary researchers, will complete the first ROV-based deep-sea exploration of the Southern Ocean-facing submarine canyons offshore southwestern Australia. The team is advancing the findings of their successful 2015 expedition to Perth Canyon, which offered significant optimism for finding prospective habitats, new species, and critical coral species for proxy applications. The area, Bremer Canyon, resides within the all-important Southern Ocean. The southern polar waters feed all major ocean basins and play a central role in driving the global climate system. The team will focus on targeting both key living and fossils of deep water corals. The skeletons of these organisms will be subject to comprehensive chemical (proxy) analyses to reconstruct ocean environmental records (both recent and long-term) to help better understand ocean-climate dynamics, especially for periods of major climate change. The outcomes will have important implications for the sustainability of these ecosystems, as well as similar habitats worldwide, providing much-needed deep-water proxy data that are key to accurately model and predict ocean-climate dynamics in a warming world with increasing CO2 concentrations. The answers found can have major impacts both regionally and worldwide, helping to predict the effects on deep-sea calcifiers and marine ecosystems in general, while also informing the wider context of modelling future climate change scenarios and their broader impacts on society.

Very few deep-sea areas have had the luxury of being well-sampled over both large spatial and temporal scales. Dr. Nerida Wilson (Western Australian Museum) and her team aim to identify and characterize the benthic biodiversity in the Cape Range and Ningaloo Canyons and complement ROV surveys with Environmental DNA (or eDNA), which refers to all the genetic material that can be recovered from an environmental sample. Exploring marine areas adjacent to known terrestrial hot spots offers an effective strategy for identifying undiscovered biodiversity. The remote Western Australian coast (Eastern Indian Ocean) is well known for its extensive karst system and network of subterranean water bodies that support an immense diversity of evolutionary significant fauna. In stark contrast, the deep-sea environment adjacent to this celebrated area remains almost unexplored. To counter this information deficit, the interdisciplinary team plans to actively survey a significant and biologically unexplored submarine canyon. The team will expand on the baseline seafloor mapping in the Gascoyne Marine Park to develop the regional context of canyon habitats in which to interpret the faunal inventory. Understanding what biodiversity occurs in these zones is paramount to activating effective management processes. 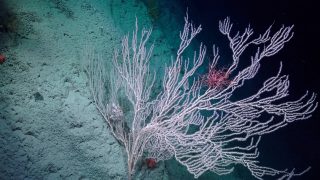 Within Australia’s largest marine reserve, the recently established Coral Sea Marine Park, lies the Queensland Plateau, one of the world’s largest continental margin plateaus at nearly 300,000 square kilometers. The plateau contains 30 large coral atolls including the famed Osprey Reef, Lihou Reef, and Diamond Islets. Here a wide variety of reef systems range from large atolls and long banks to shallow coral pinnacles. Virtually unmapped and mostly unexplored beyond the shallower parts of these reefs, Dr. Robin Beaman, James Cook University, and a team of scientists from Geoscience Australia, The University of Sydney, and the Queensland Museum will work remotely with R/V Falkor to conduct unprecedented mapping and exploration of the Queensland Plateau. The expedition will provide insight into the geological evolution and biodiversity of Australia’s marine frontier. 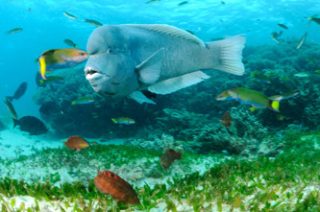 As ocean temperatures increase, a pressing global challenge in marine science is to better understand the distribution and characteristics of the critical habitats that support mesophotic and deep-water coral communities. Dr. Brendan Brooke (Geoscience Australia) and Dr Robin Beaman (James Cook University) and their multi-disciplinary team will apply a suite of cutting-edge technologies to explore the remote, little-studied platform reefs and seamounts in the Coral Sea Marine Park and canyons in the Great Barrier Reef Marine Park. The goal of this expedition is to understand what role these large-scale features may play as refuges for coral and other benthic and pelagic communities in a warming ocean. On board of R/V Falkor the team will map and characterize the structure of the features, the habitats they provide and biota they support to reveal their formative geological processes and present-day key ecological features. This will enable predictions of the broader distribution of similar environments that support critical deep-water biological communities. The survey outputs will greatly expand the knowledge base for the sustainable management of these unique features; and establish environmental baselines by building on previous mapping in the Marine Parks. This work will also highlight the importance of high-relief features globally for marine biodiversity conservation and provide a template for a feasible survey approach to effectively inform management of high-value, remote areas.

Schedule delayed from October to Nov/Dec due to COVID-19

This research and development cruise will focus on scalable autonomous technologies for benthic visual mapping and monitoring coral reefs of the Capricorn and Bunker Group in the Great Barrier Reef using multiple unmanned platforms. Dr. Oscar Pizarro (University of Sydney) and his team of international researchers plan to develop a system based on multiple, simple, robust imaging platforms that can be repeatedly be deployed from an autonomous surface vessel or operated by a non-specialist from a small boat. The development and demonstration of this imaging system is expected to remove three of the major impediments to widespread and frequent seafloor imaging: (1) the cost of manned support vessels, (2) the need of expert personnel to operate traditional robotic platforms, (3) the high level of expense and technical complexity associated with the long duration of sub-surface vehicles. The success of this cruise has the potential to change the course of seafloor exploration and mapping moving forward into the future.