Today was very eventful with continued DIDSON operations, small boat operations, acoustic sampling of additional areas for pilot whale echolocation activity (a.k.a. ‘clicking’), and more photo identification of short-finned pilot whales. This morning we also got to see our first pod of spotted dolphins from the small boat.

The day ended with a barbeque on the lounge deck to celebrate the birthday of Colleen Peters. As one of our two marine technicians, she has been an integral  part of our cruise’s success, working tirelessly day and night. We even danced and sang a few sea-shanties—which are a type of maritime working song. Later, when we were finally able to peel our eyes off the water after sundown, we watched Around Cape Horn, a historical sailing film.

In addition to our routine operations, Safety Officer Jason Garwood was kind enough to give us a tour of the bridge. The impressive technologies there include a large radar map, which shows us where we are in relation to the Big Island. Being able to see a ship’s location electronically like this, as opposed to relying on paper charts, is a distinct advantage of modern maritime technology. There’s also a display of key data including wind, drift, universal standard time (UTC), distance, bearing, waypoints, alarms, speed, and position. The bridge also gets a feed of all the sonar mapping and other science data that might be coming through. That’s a lot to keep an eye on while driving the ship!

As opposed to the large wooden helms of the days of old, R/V Falkor’s wheel is electronic, so it’s small, resembling that of a go-kart. Jason showed us the autopilot system, which he uses to execute particularly tight turns. When we visited the bridge, he was working up a small sampling pattern to get coordinates for the science team’s transect. For Jason, one highlight of working on this part of Falkor is the view, which includes many a sunrise and sunset.

Jason explained how they use dynamic positioning for activities like lowering the CTD and DIDSON or other back deck operations, an electronic system that uses GPS and precise control of the propellers and thrusters to keep the ship in one fixed position. Twenty-four-hour operations are challenging and require manning the deck, controls, and CTD, as well as small boat operations, and of course plenty of scheduling to make sure there are no conflicts between these activities. Working on the bridge also requires fielding a barrage of phone calls, radio transmissions, visitors, and occasional sperm whale false alarms – as happened during our visit. It was a great learning experience observing this seaman at work.

Next, we moved to the engine room with our host, Allan Watt, the ship’s chief engineer. He was kind enough to lead us along a maze of machinery that takes six crewmembers to manage. Upon Allan’s strong suggestion, our tour began with ear plugs, since the engine rooms are extremely loud. He explained that much of the engine’s machinery was built in 1981, though everything went through a major overhaul three years ago and all the controls were replaced then. With these advanced new controls the engineering team can manipulate the engines by computer, or locally working in the engine room.

This engine labyrinth includes much storage space, electrical supply, hydraulic units, voltage/frequency outputs, fuel oil centrifugal separators, and a welding workshop. We also saw the R/V Falkor’s two main engines. Together they have almost 8,000 horsepower and can propel the ship at up to 23 miles per hour. Lastly, we were treated to a viewing of the ship’s satellite and computer technology. This is truly a state-of-the-art research vessel. 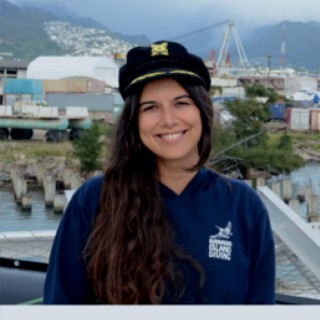 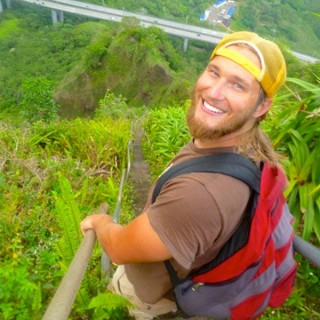