Today was another exciting day, full of marine mammal sightings and small boat operations. We spotted humpback whales, short-finned pilot whales (a target research species), and pantropical spotted dolphins. The total list of species sightings for the cruise also included spinner dolphins. Below we’ve included a short overview of the terms we used to report on the marine mammals we spotted, including some of the spectacular behaviors we’ve seen.

It is clear, after a week on board the R/V Falkor that Schmidt Ocean Institute (SOI) strives to be at the forefront of new technology and innovative research methods. SOI purchased a remote-controlled blimp shortly before our cruise departure, and the students onboard were lucky enough to get a chance to watch it in action. Jack Komonee, with eBlimps, was a last minute addition to our crew and has added another dimension of excitement to our daily operations onboard the ship.

Jack not only builds the blimps from scratch but is also very good at launching, steering, and landing them using a remote controller. He has incorporated a camera system into the gondola of the blimp that enables the user to maneuver a mounted GoPro while it’s in the air to get video or photos.

Scientists at NOAA’s Southwest Fisheries Science Center are already using aerial vehicles to study sperm whale behavior. They have developed ways to determine the age, weight, and relative state of health of large whales through aerial footage. This has proven to be a safe, non-invasive way to observe whales and other marine animals in the environment. Aerial surveying through unmanned aircraft does have its limitations, though. In the case of the blimp, winds need to be around 10 knots or less in order to maintain control, and the ship must be nearby for landing.

SOI’s acquisition of the blimp opens new possibilities for aerial surveying from the ship and may be used in future research projects. Footage from the video clearly displays the capabilities and usefulness of this emerging scientific platform.

Angle to bow – a number used to give a bearing or direction for the sighting relative to the ship. A number between 0 and 360 degrees, with 0 or 360 being straight ahead and 90 being straight to the right while facing the bow of the ship

Blow – the breath of a whale, often visible as a cloud of mist for larger animals

Breach – a spectacular surface behavior where the whale pushes most of its body, starting with the head, out of the water

Dolphin – a common term used to refer to many small odontocete (toothed whale) species, including species commonly referred to as dolphins as well as species such as pilot whales and killer whales

Dorsal fin – the fin on the back of the animal, often used for photo identification of marine mammals

Fluke – the back “tail” of the whale. Also a term used for a behavior (fluke up dive) where the fluke is raised out of the water.

MMO – marine mammal observer, a person who looks for and records data on animal sightings

Pectoral flipper – the two-sided flippers of an animal, evolved from the arm or foreleg of the ancestor species

Socializing – behavior of animal group where they move around each other but not resting or traveling. May include playful behaviors

Whale – all cetacean species are whales, including dolphins, but term often used to refer to the large baleen whale species and large toothed whale species. 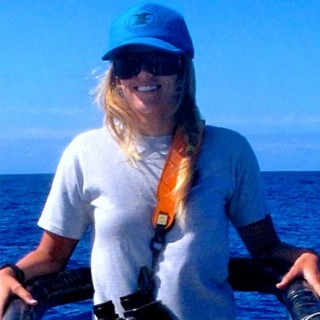 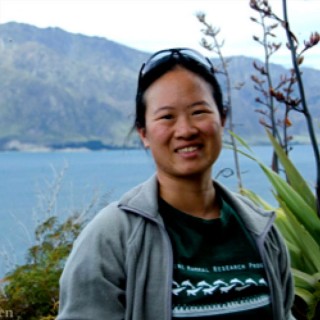