Discovering the pattern language to connect seemingly disparate elements and systems is the common thread within the art and design-based work I create. I use these discoveries to call attention to the ever-present interconnectedness of our environment. I was thrilled to be selected as the Schmidt Ocean Institute’s Artist-At-Sea onboard the R/V Falkor to join the interdisciplinary team of scientists who will be mapping the seafloor, collecting water mass and water flow history, while collecting/identifying corals, animals, and microbes of six to seven seamounts along the Emperor Chain. During this cruise, I will explore the pattern connections between the range of science data procured through spatial-based mapping methods to create a series of two-dimensional pieces and sculptural experiments.

To prepare for this cruise, I packed a variety of art materials and supplies ranging from paper and fiber to PLA filament and silicon mold-making ingredients. During the two-day orientation in Honolulu, I was able to visit Professor Les Watling’s Biology lab at the University of Hawaii at Manoa, where I saw preserved coral specimens with striking forms, surfaces, and textures such as a whole colony of Iridogorgia and the Purple Stoloniferous Octocoral. Luckily I was able to bring samples of Keratoisis and Anthothela and some light reading from Watling’s lab.

Transit to Hess Rise
As we departed from port in Honolulu, I documented the change in the color of water using Dunn-Edwards color chips for comparison. The shades of blue are quite incredible — brilliant and saturated. I will continue to document the color of the ocean at each seamount dive. During and after the cruise, I can return to these chips for a closer representation of the ocean’s colors than those capture by my iPhone.

With the Keratoisis and Anthothela specimens I borrowed from Watling’s Lab, I performed test runs with the 3D scanning photogrammetry program Autodesk ReCap Photo to compare the quality of 3D scans to the actual specimens. With some adjustments made during the capture process, ReCap Photo seemed to produce fairly desirable 3D scan results as seen in the Anthothela image; therefore, I will be using this process to 3D scan some of the specimens from the first dive at Hess Rise and the subsequent locations along the Emperor Seamount. The files generated from this process will be refined in Autodesk Fusion 360 and shared among the science team so that they may recreate the specimens using a 3D printer. I will also be 3D printing some of the specimens using the Creator Pro Flashforge 3D printer onboard with PLA filament.

Coming up…
As I adjust to the dynamic motion of the water, I have been absorbing an enormous amount of information both from the scientists and the technicians during this first stage of the cruise with more details to come in the upcoming posts. A valuable and significant aspect of my experience so far has also been to converse with the scientists about the questions that lead to deeper inquiry. I find the overarching question regarding the existence of a biogeographic boundary along the Emperor Seamount Chain really fascinating as it causes me to think about what constitutes or defines “boundaries” in a fluid and dynamic system, how are they controlled or directed, are they permeable, and whether diffusion occurs along the boundary. Reframing these questions in the context of art and science helps to push me out of my comfort zone. Additionally, my interest in utilizing textures, tactile qualities, and fluid pressure has been growing, as I consider links between ourselves and the deep sea/marine life and organisms we are exploring. 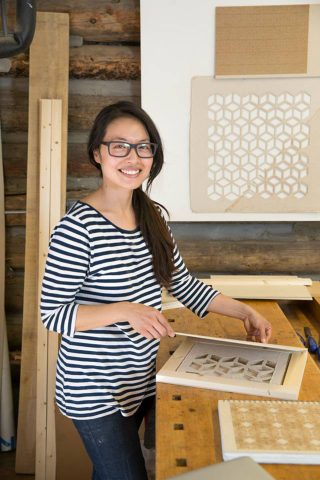