The deep sea. Dark. Silent. Unless of course there is a Remotely Operated Vehicle streaming the excited “oohs” and “aahs” of scientists seeing their favorite animals for all the internet to hear. I make all kinds of squeaky noises when I first see a coral forest being lit up by the vehicle’s LEDs; the forms of octocorals and black corals in the deep can easily invoke comparisons to an alien landscape.

Teamwork
In general, I find corals so very interesting because of the colonial aspect of their nature. A single baby coral lands on an ever-so perfect spot and very quickly goes about making copies of itself (after changing from a larval form into a polyp). These polyp copies then work in tandem to build a structure for themselves that should provide the most optimal layout for getting food and surviving the elements. For shallow-water octocorals in coastal areas, that often results in springy tree-forms than can survive waves crashing over them, or soft, pillowy forms with almost no hard parts. For deep-sea corals, where waves are not a concern, these corals can form towering but fragile trees, or spindly skyscrapers with few to no branches at all.

The polyps on the colony generally function independently, but they share tissues in order to transport nutrients and messages throughout the whole colony. A disturbance at one end can quickly be related throughout so that all the polyps close up in a defensive position against whatever is bothering them (In my experience it as been a manipulator arm of a deep-sea vehicle).

I am also fascinated by deep-sea seamount ecosystems as a whole. There are still many gaps in our knowledge about how the ecosystems function and why certain species are where they are. Why do corals and sponges settle in one place but not in another? Why do they thrive in certain areas? Are there succession states, similar to terrestrial island colonization?

We Have Made Contact
Something we do understand, however, is that these ecosystems are highly vulnerable to human activity. In the Emperor Seamounts – where we are for this research cruise – trawl fisheries have been active since the 1950’s. The boats use very large nets that are weighted down by steel plates or heavy wheels called “bobbins” which keep the net open and close to the sea floor. This gear is then dragged repeatedly over the seamount to capture fish such as Alfonsino, Oreo, Rockfish, Grenadiers, and Armourhead. Included in the capture, however, are also bycatch of corals, sponges, and non-target fish species. The corals and sponges provide habitat for fish, crustaceans, brittle stars, and other animals, but they are slow-growing (i.e. millimeters of growth per year) and larval settlement does not happen frequently. The frequent damage caused by trawling prevents regrowth, and the scale of damage could mean entire seamount summits wiped clean.

We will be searching for coral on these dives at deeper depths than trawlers currently fish, but with the demand for more fish, as well as the development in technology, fleets are moving deeper and deeper. I am hopeful we will find healthy communities that continue to provide important habitats as well as other ecosystem services like carbon sequestration and nutrient recycling. Regardless of their importance, they are also simply gorgeous natural systems that I will always feel extremely lucky to have the chance to see. If we can come together to protect more of our oceans from damaging activities, those ecosystems will be there to amaze and inspire future generations. 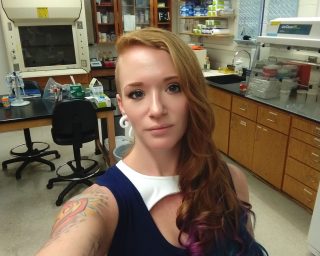