In 1996 Deep Blue, a chess playing computer developed by IBM, became the first computer to win a match against a reigning world chess champion. This victory of machine over human was the culmination of a decade-long development effort and a major milestone. As I observe the ROV SuBastian’s robotic arms moving our underwater tools, I am struck by the similarity of the study site with that of chess pieces on a board.

Like Deep Blue, our team’s effort builds on years of collaborative research. The focus of this expedition is advancing robotic systems to autonomously explore complex and potentially hazardous natural environments. During our time on Falkor we have sought to push the envelope of robotic cognition, planning, and control. Unlike chess, in this contest our machines face a wily and venerable grand master, Mother Nature, who sets the rules and reveals them to us only partially. But our robots are also learning how to be clever.

Over the past two weeks our automated mission planners have been toiling away on Falkor’s high performance computing cluster, examining faint environmental clues recorded in sonar echoes, underwater imagery, and chemical signals. By applying inferencing models and contextual clues, they are learning to identify patterns indicating where oases of exotic life deep sea exist and how to most efficiently dispatch our robots to explore these areas. At first the progress was slow, requiring over a day to generate a simple mission plan that any modestly-informed human could sketch out in seconds. But now these mission planners are capable of designing optimized mission plans in seconds, with levels of detail that would be intractable for a human to replicate.

In order to function in this tectonically active terrain, we have equipped our autonomous underwater gliders, Sentinel and Nemesis, with sensing and control systems that enable continuous adaption their survey operations to match environmental conditions. During this expedition they traversed hundreds of kilometers, using onboard acoustic sensors to safely navigate their way among underwater volcanoes and within subsea canyons. As their missions have grown in complexity, the robots have demonstrated new, emergent behaviors, which border on anthropomorphic. Each time they are deployed, our research team here on the ship resembles like a group of helicopter parents, waiting uneasily for these robots to call home and let us know that they made it safely to their destination – and tell us all about the interesting things that they have discovered along the way. At present, these automated systems often behave similar to toddlers, requiring much care and feeding. But like any toddler, these robots are developing rapidly and I am confident that we will eventually stop helicoptering. Ultimately, our goal is to use what we have learned here at the Costa Rican shelf break to inform the design of fully autonomous robots that will one day explore the oceans of Europa and Enceladus. When that day comes, we will have upped our game to a level that we will be able to challenge any grand master in the solar system. 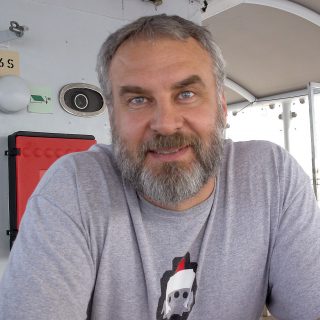 The Crawl Before the Walk

The Creative Process in an Artist-at-Sea Experience