A ring net for collections

The science team and Falkor crew rose early this morning to deploy the first plankton tow of the day. Using a ring net, scientists towed below the ocean surface collecting zooplankton for further study. The net pulls diagonally through the water column at approximately 45 degrees, and consists of a mesh cone with an open ring, and a jar at the tapered end for plankton collections (called a cod end). The collections will be used for a variety of experiments on board R/V Falkor including fluorescence exploration and paternity analysis. Unlike the MOCNESS, this net does not allow for tows at specific depths because the mouth remains open the entire time. However, for several of our studies, we do not require the knowledge of depth stratification.

One of the student projects being investigated is the potential for multiple paternity in a type of marine zooplankton called copepods. Copepods are small (1-2 mm) crustaceans found in most ocean environments. Multiple paternity is the input of DNA from more than one adult male in one batch of offspring. The potential for multiple paternity is important to copepods because any breeding strategy that maximizes the number of males contributing to the gene pool increases genetic diversity, and therefore increases capacity for adaptation to environmental change. Multiple paternity can also provide genetic benefits to the female by improving her chances of acquiring ‘ideal sperm’ with compatible genes and producing the highest quality offspring.

To combat the challenges of skewed sex ratios (nine females to one male), there are a variety of reproductive strategies that copepods use. Copepods can carry their eggs in external sacs until they are ready to hatch, some sacks that get fertilized as the female’s eggs pass by, once they are released. Some copepod species are thought to be multiple maters, but we currently know little about how many or which males fertilize their eggs. Many studies have investigated the survival component of copepods; however, there are several aspects of copepod reproduction that are poorly understood. No one is really sure if females are able to determine the quality of the male she is mating with; however, there is some potential evidence for mate choice by females. This has been demonstrated by females performing dances, escape jumps, and even shaking off unwanted males. If a female is able to discriminate between high and low quality males, she may choose to mate only once if she finds a high quality partner. If she cannot tell the quality of her mate, she may reproduce as many times as possible to increase her chances of mating with a high quality male.

Today, we began separating adult female copepods from the buckets of zooplankton and ocean water collected by the ring net tows. Thirty six copepods from the species Haloptilus longicornis were set aside with each individual separated into a well. The females will now be incubated until their eggs are released and hatch into nauplii (baby copepods), which takes approximately 24 hours. Copepod moms and offspring will then be preserved and taken back to the University of Hawaii for further genetic analysis. By looking at the genotypes of mom and offspring we will be able to determine if there were multiple fathers, a copepod who’s your daddy investigation. 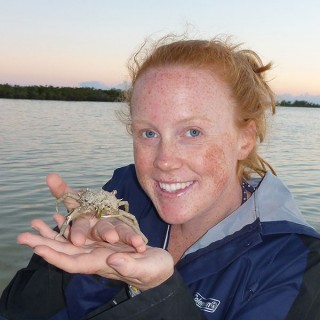