With just a few days remaining on the R/V Falkor, I am putting the finishing touches on my paintings and starting to reflect on this whirlwind experience. I have had the opportunity to work alongside brilliant scientists and crew members, delve into fascinating deep sea subjects, and explore groundbreaking artistic techniques by painting with the manipulator arm of Remotely Operated Vehicle (ROV SuBastian).

A major highlight of this expedition was our thorough exploration of the Point Dume Seep. Our skilled ROV pilots even collected one of its characteristic carbonate chimneys. Before this cruise, I have only ever seen video and photos of these chimneys. Having the real sample sit next to me while I painted has been a total game-changer. I have been able to observe all the nuances of its surreal (almost anthropomorphic) structure.

Standing watch during our numerous dives on the seep also gave me a deeper understanding of the landscape of the seep and the arrangement of its structures. One of the most exciting moments occurred when ROV SuBastian’s incredible high-definition cameras captured fluid flow emerging from the chimneys. This observation could be a major key to unlocking how these mysterious structures form.

Fresh Knowledge, New Sources
In addition to revisiting existing muses, I have been introduced to countless new sources of inspiration. Scientist Jill Peterson joined our cruise to study a highly unusual clam species that inhabits these southern California borderland seeps. Like many of my favorite painting subjects, these clams thrive in spite of extreme darkness thanks to chemosynthetic symbiotic microbes that transform sulfur into energy. They have evolved a huge gill, which hosts these symbionts, and often appears yellow due to a high concentration of sulfur. Though these clams (of the Lucinidae family) have a very distinctive biology and morphology, they appear at first glance quite similar to clams found at restaurants and grocery stores. This unique quality—a tension between the familiar and unfamiliar—makes them an ideal subject for painting.

In fact, this entire expedition embodies a similar duality: most of our dive sites take place just a few miles off the coast of southern California’s most populated areas (familiar), and yet we are diving on sites thousands of feet below the surface, full of organisms that thrive on an entirely separate food chain, derived from chemical seeping from the Earth’s core (unfamiliar). Many of our dives have explored territory never before captured by an ROV. It is all a fantastic reminder that even though these bizarre chemosynthetic ecosystems may seem exotic, many of them thrive practically in our own backyard. This concept, along with the incredible organisms and sights I have encountered, will fuel my painting practice for months – and even years – to come. 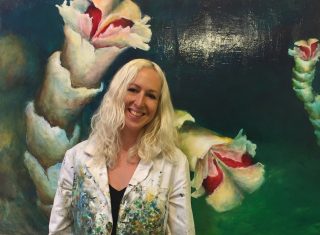