Remotely Operated Vehicle (ROV) Global Explorer dove today to the deepest point yet on this expedition, on a site called ‘DeSoto Canyon’. At a depth of 2100 meters, the vehicle successfully navigated to the exact location visited previously by NOAA ship Okeanos Explorer. The team shot 3D video, collected water, animal and push-core samples, and deployed their first physical marker on the seafloor.

Santiago Herrera, a PhD student at the Massachusetts Institute of Technology and the Woods Hole Oceanographic Institution, participated and observed the previous dive at this site in April. “The overall plan of this dive was to follow the same steps as the Okeanos, and to sample some of the corals and communities that thrilled us the first time” he said. “We really wanted to document the diversity of the corals at this site. In fact, there are some corals at this site, such as the chrysogorgiid golden coralMetallogorgia, that we have not found anywhere else in the Gulf of Mexico, east of the Straits of Florida”

This site has high diversity and abundance of corals – that is, there are many different types of corals and there are a lot of them compared to other sites in the region. The dive started on a flat muddy bottom, and the ROV moved towards a steep, almost vertical rocky wall that was lined with bamboo corals, as well as the black coralBathypathes, and chrysogorgiid corals such as Iridogorgia. Many of these coral colonies were several meters tall, appearing to brush the screen in the 3D video.

Samples from this site are very important for ongoing research into the population connectivity of communities in the Gulf of Mexico. Connectivity refers to the exchange of individuals between populations, and this can be inferred using genetics. Santiago and his advisor Tim Shank have been involved with population connectivity studies looking at, amongst others, a species of brittlestar that are found in association with a particular species of coral called Paramuricea. “What we have here is what seems to be the same type of relationship, the same kind of corals and brittlestars that we have sampled in the northern and western portions of the Gulf,” Santiago explained. “Having these samples is extremely valuable, and enables us to better understand the connectivity patterns among these populations.”

Knowledge of connectivity may also provide a broader understanding of the impacts of the 2010 Deepwater Horizon oil spill, which occurred at a similar depth, approximately 250 km east of our dive site. “We have samples from the northern Gulf of Mexico, near to the location of the oil spill. By unravelling the spatial patterns of population genetic variability, we can start to infer larger scale consequences of that. We could begin to understand what a loss of a particular population represents in terms of the whole Gulf of Mexico.” It may be that the whole Gulf of Mexico is “well connected” and therefore the loss of one population may not have a serious effect on another; or it may be that the northern population is a major source of individuals to other regions in the Gulf, in which case, this loss may be more significant.

Another person who was excited about samples was Janessy Frometa from Amanda Demopoulos’ lab at the US Geological Survey (USGS). The ROV collected three sediment samples using push-cores, essentially long tubes with handles that can be grasped by the manipulator arm. Janessy is looking to understand the food web, composition and diversity of tiny invertebrate communities that live in the mud. Back in the lab Janessy uses a microscope to identify hundreds of animals including worms, crustaceans and molluscs in a single push-core. Push-cores that are aimed at looking at macrofauna are typically obtained both near coral sites and away from coral sites, in order to understand whether the presence of coral affects community composition. “These samples in particular will be sent back to the lab for stable isotope analysis, this will help us to understand what these animals are eating,” she said.

The vehicle was also able to deploy the expedition’s first marker on the seafloor. The markers enable the scientists to easily return to the same corals during future sampling and observation. 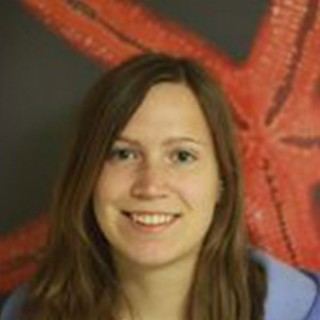