This was a shakedown to remember. It was the first time for many things aboard RV Falkor – the first time chased by a tropical storm in the Gulf of Mexico, the first time diving with a remotely operated vehicle (ROV), the first time mapping in rough weather, and the first time imaging corals in 3D, among other things. The ship and ROV performed admirably under adverse conditions. RV Falkor’s navigation and station holding were exceptional, and Global Explorer MK3 performed very well at great depths.

To summarize the itinerary, the ship left St. Petersburg at midnight on August 26 and returned to Pascagoula at 8 pm on September 5th. The first three days were spent circumnavigating the as-yet-undetermined path of a growing tropical storm Isaac. Captain Bernd Buchner steered west ahead of the storm, and then came safely around the backside. This brought us back on station at our first dive target on Aug 28. We remained in heavy seas with strong wind, too rough to dive. For the next two days, weather would dictate operations.

Mapping was not a planned objective, but RV Falkor is equipped with state-of-the art acoustic systems capable of mapping the seafloor and water column, so we put these systems to the test. The result was two surveys, a canyon survey with the Kongsberg EM 302 that mapped 750 sq km of seafloor to 3300 meters depth at 10 m resolution and a ridge survey with the EM 710 that mapped 120 km of seafloor to 500 m depth, also at 10 m resolution.

The first CTD-O Niskin cast was accomplished off West Florida on Aug 30, as wind and seas died down. The ship’s crew and research team collected water samples from 3200 m depth (a 90 minute descent), with subsequent casts in northern parts of the Gulf at 2500 m and 2200 m. A total of 36 water samples were collected for water chemistry using CTD-O niskin rosette, with another nine water samples would come from another set of bottles attached to the Global Explorer MK3 ROV.

The first ROV dive recovered before touching down, but a second dive followed quickly to 550 m depth August 31, landing adjacent to a feature we called Okeanos Ridge. The primary coral target Lophelia pertusa was encountered within 7 minutes. Some of us had spent entire research cruises looking for this coral in the past. Other coral targets would soon follow, including large sea fans (octocorals) and large, presumably very old Leiopathes black corals. Corals were imaged and scaled using 2D and 3D video. No samples were collected until the hydraulic system on the ROV became effective on Dive 4 to 2100 meters in DeSoto Canyon.

The deepest dive of the expedition was important for several reasons. The dive was a record breaker for our expedition. It also retraced the path of a previous dive by Okeanos Explorer and Little Hercules ROV in April 2012. That reconnaissance allowed us to identify and target the best possible coral habitat for sampling. The Global Explorer ROV team retrieved 11 biological samples using the hydraulic arm, including two bamboo corals, three sea fans, each with an ophiuroid brittle star, and three push cores. Four water samples were collected by the ROV near the sediment interface (i.e., the seafloor) for water chemistry.

The fourth day of diving brought a fifth dive to 1000 m depth in Atwater Valley 357. We encountered cold seeps for the first time. We collected water above seeps and Madrepora coral. As we explored new, deeper areas of a mound feature, we observed the largest sea fans of the expedition. Numerous shrimp, crabs, and brittlestars adorned each sea fan colony. Some colonies were toppled, perhaps due to the loose, unconsolidated sediment they had settled upon. Unfortunately, we did not stay long on the seafloor due to power failure. AT357 remains a high priority target for biological sampling in the future. Towards the end of the cruise, on Sept 4th, rough weather kicked up again, so Falkor steamed towards port.

Our Deep Coral Shakedown finished with four productive and rewarding dives, three full column CTD-niskin casts for water chemistry, and one exceptional map of the West Florida Escarpment. We have a total of 15 hours of 2D and 3D video to sort through, much of which features our target animals. Target selection was very good. We found corals at all four of our target sites, and discovered two new Lophelia aggregations on West Florida Escarpment. All in all, the cruise was very successful.

Thanks to the crew of the R/V Falkor from Schmidt Ocean Institute, the ROV team from Deep Sea Systems, as well as the science teams from Temple University, Woods Hole Oceanographic Institution, College of Charleston, and National Oceanic and Atmospheric Administration. This was a great team effort, and an unforgettable experience. Once again, mission accomplished! 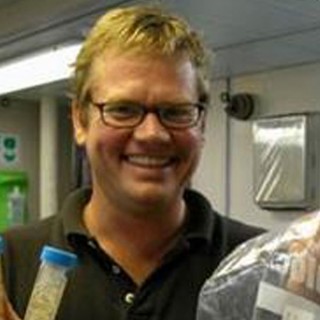