What Color is the Ocean? The Sky?
Most of us would reply immediately—blue! But what shade of blue?

I am exploring this topic during the research cruise by capturing the blues of the sky and sea through direct observation using my eyes and three instruments—watercolors, photography and a cyanometer. Our research cruise has taken us from the deep blue water of Hawaii to teal-colored California coastal waters. I decided to record this shift so I could improve my perception of blue. I use the color a lot in my illustration work since I paint mostly sea life.  And, as the scientists are measuring the color blue, I decided it would be great to compare and contrast how we record and interpret color.

The scientists also brought tools to observe and capture the color of sea and sky. They are using radiometers to measure different wavelengths of light. One instrument lives on the bow of the ship for the duration of the voyage and follows with the path of the sun. The other is periodically deployed by scientists off the stern. Both of these instruments see more shades of blue than me (or my tools), and are sensitive enough to measure the intensity of the entire spectrum of visible colors, as well as measuring infrared and ultraviolet light.

The cyanometer I’m using was invented by a Swiss scientist in the 1700s. Horace-Bénédict de Saussure used the pigment Prussian Blue to create 52 shades that he layed out in a circle. He used it to determine the blueness of the sky, and then Alexander von Humboldt used it to measure both the color of sky and sea. I first heard about the cyanometer while listening to the audio version of Andrea Wulf’s book, The Invention of Nature. I also read some online articles that helped me determine that adding a cyanometer to my field sketching kit would be perfect for the Artist-at-Sea Cruise.

We know the shift is ocean color is due the amount of phytoplankton in the water—Hawaii’s blue water indicates low levels, California’s greenish water indicates high levels. The scientists on this cruise are using the measurements to help calibrate satellites that also record the color of the ocean. Phytoplankton are the base of all oceanic food webs and their productivity (as well as their numbers) tell us about what’s happening in our global ecosystem.

My measurements every day, without fail, regardless of weather have connected me to the ever-shifting clouds, waves, and wind that surround us and have connected me to our global ecosystem in a less quantitative and more creative way. The daily observations have become a kind of meditation and I’ve noticed many more things and interconnected creative ideas during each hour long session which would not have happened had I not taken the time to do it.  I looked forward to making these measurements before our cruise was completed, not just for the observations but what happens creatively during them as well. And, since sky is something I can see from anywhere on the planet, I’ll be packing my cyanometer and blue palette in my sketch kit wherever I go. 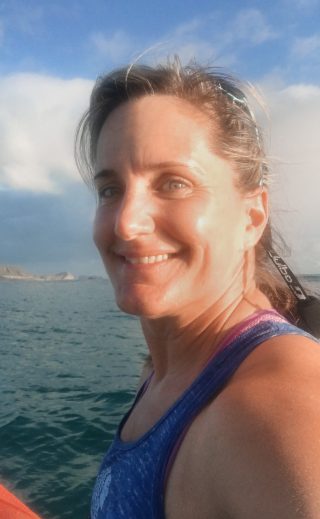