A Little Goes a Long Way

Cruise Log: Study of the Sea-Surface Microlayer and Air-Sea Boundary

I am one half of the trace element sampling team – mentioned in an earlier blog post as the ‘Dust People.’ Together with Bill Landing from Florida State University, we are collecting a range of samples (aerosols, a.k.a. dust; rain; sea-surface microlayer; and underlying water from about 30 cm depth) for the determination of trace elements. We are doing so because much in the same way that plants on land need the right balance of nutrients and minerals for growth, so do plants (phytoplankton, phyto = plant) in the ocean. The reason we care about phytoplankton nutrition and health is that these form the basis of all marine foodwebs, as well as taking up approximately half of all the CO2 removed from the atmosphere. So, these tiny marine plants (the majority are microscopic) are a big deal for global climate and life on Earth!

Apart from the nutrient elements nitrogen and phosphorus, arguably the next most important element required for growth is iron. It turns out that up to 40% of the global ocean is iron-deficient. Anaemic, if you will. Iron, like other essential trace elements such as copper, zinc and cobalt are present in seawater at concentrations so low (think one drop of water in a 50 metre long, 2 metre deep Olympic-sized swimming pool) that the growth of marine primary producers (i.e. the phytoplankton) can be limited. Fortunately, several hundreds of thousands of years of evolution have allowed these canny phytoplankton to develop strategies to exploit niches which allow them to acquire these essential elements.

Once such group that really are extraordinary is the genus Trichodesmium, a.k.a. sea sawdust. Trichodesmium species are from a group of organisms called diazotrophs, which means that they are able to meet their nitrogen requirements by fixing nitrogen directly from the atmosphere, rather than taking it from the surrounding water. This gives them a huge advantage as they are able to live in parts of the ocean that have extremely low nitrogen concentrations; the marine equivalent of deserts on land. However, this comes at a cost. Nitrogen fixation requires a lot of iron, which is a problem in large areas of the open ocean. Fortunately, the atmosphere can be a source of iron, transported by winds, and primarily sourced from the world’s terrestrial deserts. Everything is connected! Seeing the huge ‘slicks’ of Trichodesmium from the ship told us a whole lot about the chemical composition of the water we were sailing through, but it also raised the question of the source of atmospherically-transported iron. Was it coming from the red interior of Australia? Certainly this is a possibility, but our filters didn’t look much like the orange-red soils of the Australian desert. Instead they were a sooty grey. Pollution? But from where? Darwin cannot exactly be described as a major population centre. The answer lies in the time of year. We left Darwin just at the end of the dry season, when prescribed burns are a common measure to limit devastating wildfires. In technical terms, this is referred to as biomass burning. Is it pollution? Well that depends on your perspective. Is it a source of iron? Not directly, but organic compounds associated with the burning material helps to increase the solubility (the amount that can dissolve in the water) of the iron (yes, iron can dissolve in water!), thus allowing the biota to access it. 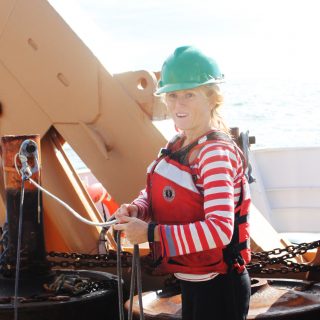 The Time Has Come

Islands within an island

No Time to Lose

A Little Goes a Long Way