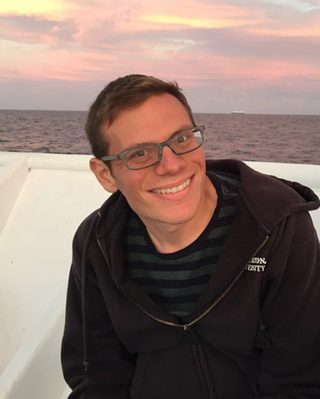 Dr. Andrew Babbin is a nitrogen biogeochemist, chemical oceanographer, or microbial ecologist, depending on whom you ask. He and his group study how microorganisms reshape their local environment, whether a coral reef, a hydrothermal vent, or in the case of this cruise, an oxygen minimum zone. The bablab, as they are known around MIT, try to unravel which metabolisms exist in a marine system, which microorganisms are performing them, and what chemical cues control their function, all in an effort to understand how climate develops, one microbe at a time.

Andrew’s path to researching the nitrogen cycle began at Columbia University where he was an undergraduate in Earth & Environmental Engineering, but his passion truly cemented itself in graduate school at Princeton University, from which he earned his Ph.D. in Geosciences in 2014. At Princeton, Andrew worked with Bess Ward, one of the preeminent nitrogen biogeochemists in the world, and became fascinated with the metabolic pathways that operate when oxygen is absent.

Now, in his lab at MIT in the Department of Earth, Atmospheric & Planetary Sciences, his group investigates the microbial system by combining laboratory experiments, field expeditions, and some rudimentary modeling to describe the conditions under which certain metabolisms operate. They are additionally interested in the impacts these metabolisms have for microbial community development (which bacteria survive and why?) and for the environment as a whole, whether local in the case of reefs and vents or global in the case of oxygen minimum zones and Earth’s climate at large.