From August 18th to September 18th, Canadian researchers working aboard Schmidt Ocean Institute’s research vessel Falkor will be studying low-oxygen, acidic waters that form naturally in the deep sea off Vancouver Island. They will be looking at near bottom ecosystems affected by this water and determining the paths it can take as it moves inland through the Juan de Fuca and Georgia Straits, driven by seasonal weather patterns and other factors. Because this water can be stressful for some animals, such movement can lead to problems for commercially important fish and shellfish. 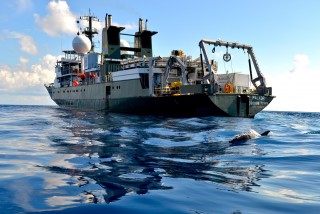 The team will be laying much of the foundation needed to create, for the first time, the capability to track the inland intrusion of low-oxygen water, and eventually to forecast when and where these intrusions are going to occur and the potential responses by bottom dwellers. This will include work to augment critical information on the topic already provided by the offshore NEPTUNE observatory, west of Vancouver Island, and the VENUS observatory in the Strait of Georgia.

Observatories are cabled equipment arrays on the seafloor that send a constant stream of data to shore, including still photos and video. NEPTUNE and VENUS provide critical information about low-oxygen waters, but much of what happens between the two observatories remains a mystery. This will be the first time that the observatories’ capabilities will be combined with other research efforts to study an oceanographic phenomenon at such a large scale.

The leader of the project, dubbed Open Ocean to Inner Sea, is Dr. Kim Juniper, director, science and user engagement, Ocean Networks Canada. Other researchers on the team will be from the University of Victoria, the University of British Columbia, Memorial University of Newfoundland, and Université du Québec à Rimouski.

Schmidt Ocean Institute selected the Canadian team’s proposal to collaborate aboard R/V Falkor using a competitive peer review process. For every proposal submitted to Schmidt Ocean Institute, an independent expert review panel evaluated its intrinsic scientific value, potential to showcase effective use of innovative oceanographic technologies, and readiness to openly share the research outcomes. As a result, the review panel named this proposal the strongest among all presented, and unanimously recommended this project for approval by SOI.

The public is invited to join the expedition virtually through regular blog posts and, between September 6th and 18th, through live broadcasts of video from a remotely operated vehicle. The ROV will be working on the spectacular rock walls of Saanich Inlet on September 6th and 7th, and then offshore in waters up to 2,000 meters deep. We’ll post blogs, photos, and video at both here at the Schmidt Ocean Institute website, and at Ocean Networks Canada’s Wiring the Abyss website.

Throughout the world’s oceans, there are layers in deeper waters known as oxygen minimum zones (OMZs). In the North Pacific, these occur about 500 to 1,100 meters down and have roughly half as much oxygen as surface waters. OMZs form as bacteria process waste material from the surface. This uses up oxygen and releases carbon dioxide, which causes seawater to become more acidic through a series of chemical reactions.  Carbon dioxide levels and, hence, acidity of ocean waters, is also increasing as atmospheric carbon dioxide levels rise. It takes decades for water containing the dissolved gas to make its way to deeper waters, but researchers are now able to clearly document increases.

There are animals that avoid OMZs, but others are adapted to the conditions found there. OMZs are not the same as dead zones, which have gained increasing attention in recent years. The term dead zone is usually used to refer to mostly coastal sites where human activities are tied to very low oxygen levels.  Nutrient pollution from shore, for instance, can fertilize algae growth and later bacterial consumption beyond normal levels. This leads to oxygen levels dramatically lower than those found in OMZs, killing many organisms such as crabs while forcing more mobile animals to flee.

In some regions like the Pacific Northwest, the lower oxygen water of an OMZ can make its way to the surface due to the phenomenon known as upwelling. This involves strong, sustained winds moving surface waters away from the coast, causing deeper waters to move upward to fill the void. Upwelled OMZ water can then move inland along paths that are not always clear. This water is rich in nutrients and so is essential to keeping coastal waterways healthy and vibrant, but lower oxygen and acidity can have the unwanted repercussions.

This inland movement is a natural process. However, there are some indications that in recent years in the Pacific Northwest it has been occurring on a larger scale. Movement inland may be more frequent, and the OMZ seems to be expanding upward by a few meters per year, causing more of the continental shelf to be exposed to lower oxygen water.

This expansion has led to fish kills in some instances, and also the death of oysters and scallops grown in hatcheries, which pump water in from nearby sounds. More acidic water inadvertently pumped in can disrupt proper shell development. One key indicator that the problem could be growing is that hatchery operators didn’t experience this problem until recent years, most famously with massive, unexpected die-offs at facilities in 2008. Some scientists speculate that inland intrusions may also cause some fish to move north into Alaskan waters.

Some researchers have hypothesized that the problem is growing because of human activities. For instance, global warming can cause wind pattern changes that might increase upwelling. However, it’s also possible that increased movement of the low-oxygen water inland is part of a cyclical pattern that might, for instance, take place on a decade scale that scientists simply weren’t observing the last time it happened. An overriding goal for the upcoming expedition will be to gather the data needed, and expand sensing capabilities at the observatories, so that researchers can begin to answer such questions.

The expedition will include two separate legs. For details on the specific plans for each and expedition logs, please click on the Leg One and Leg Two links in the lefthand column.

Data Products Resulting from this Project:

Data from this project is now available through Ocean Networks Canada. You will need to create an account to login and retrieve the data. To access, click on the Data Search tab, then on Ship Data, and select R/V Falkor.  Data available for download includes:

Support for research related to this expedition was provided by the University of Victoria, Ocean Networks Canada, the Natural Sciences and Engineering Research Council of Canada, the Canada Foundation for Innovation, and the government of British Columbia.