“There are some few creatures who get to drink the Water of Life. But no one knows who they are.” ~ Michael Ende, The Neverending Story

Greetings from Falkor, my eleventh day at sea. I had my birthday on the ship on July 28, and Kira Mizell, our geologist, said that makes me a real sailor! Two days later, Allan Watt, Falkor’s Chief Engineer, and the fitters Edwin Pabustan and Ronnie Abcede surprised me (no, blew me away) by gifting me a table easel which they had designed and made out of stainless steel, welded, ground, and polished! They and JRod, the ROV Supervisor, had observed me working on a propped-up drawing pad. A truly magnificent gift that I will forever treasure (photo below).

So far, I have completed two works. I am at work on a third, which will encompass the rest of my time on board. (My stay on Falkor is too short! I wish at this moment it could keep going on!) When I get back onshore to my home studio, I will produce a larger work based on what I have seen here, which will become part of Schmidt Ocean Institute’s art collection.

The first painting I created, BATHYMETRY SHOWING SLOPE ON HANCOCK RIDGE_601 METERS (above), was begun on the first day aboard Falkor. I observed Debs, one of the genius Marine Technicians who work in the ROV Control Room, with Dr. Lisa Levin, the Principal Investigator on our cruise, creating a map showing the slopes on Hancock Ridge, our first dive location the following day. This technology sends sonar waves to the ocean floor, similar to how a medical ultrasound works, which returns to ship to be translated into colors. Red is highest; purple is flattest. This map is important because one of the objectives of our cruise has been to locate phosphorite rock which is typically found on steep slopes.

The second painting is a CTENOPHORE, which we observed on our dive to the breathtaking San Juan Seamount, 160 miles off the coast of California. This animal appears as a starry galaxy floating in a vast space. It also has the smooth thin lines and fragile transparencies to which I am typically attracted in a subject and express the ethereal quality of many ocean creatures (These smooth lines are a bit more difficult to paint on the ship!

The third (in progress) is a jellyfish of a glowing plummy-orange color frequently seen in ocean animals, floating on a velvety-dark poured background.

Working in my studio in the dry lab, I have had time for reflection. On the ship and during my live-streamed Ship-to-Shore discussion yesterday, the question has come up as to the function of art within a scientific pursuit. What is the reason for an Artist-at-Sea, in an age when we no longer really need an artist on board to draw the specimens and the landscape, as in the days of Darwin’s illustrator on the Beagle, Conrad Martens or Maria Sybilla Merian, a sea-going illustrator at the turn of the 17th Century?

Here are my highly speculative thoughts on this question!
As Lisa Levin said during our conversation on the YouTube live stream: art captures the essence of a thing. She also mentioned that looking at art about science causes her to see it in a new, fresh way. Of course, Lisa is a special individual who has long collaborated with artists, but others have also told me that art adds a dimension to the subject, bringing it to life. Perhaps oceanographers are more receptive to this because of the spectacular beauty and color of the underwater world they study.

A distilled essence is revealed to a less cerebral part of our human existence. The greatest art—the paintings or music we love such as the Mona Lisa, universally adored for her enigmatic presence, or Mozart’s Gran Partita, Bach’s Chaconne in D minor, or John Luther Adams’ Become Ocean—is created out of the artists’ very humanity, by their hand. From the most gifted artists, this humanity pours forth for everyone to receive.

There is a reason that humans have always made art, and that we love art and music, and that so many people make art, whether as a career or a hobby. Artists get the paint or clay on their clothes and under their fingernails; it is an earthy and tactile experience to which everyone can relate and, especially in our cyber-age, we crave. Art is also about truth and/or beauty (sometimes not both.)

Why should this age-old expressive tool not be used in the service of science? Both goals must ultimately be the same: understanding, celebrating, and preserving life on earth.

Is this not also beautiful and wonderful?
For where a mirage has once been, life must be.

—From John Ashberry, “Voyage in the Blue,” Self-Portrait in a Convex Mirror 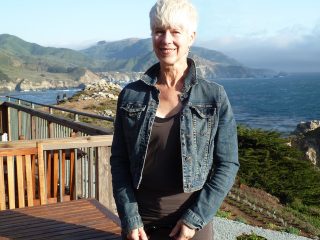 Why Care For and Explore the Deep Ocean?