Kaena Point on the island of Oahu feels like the end of the line for many island residents. You can approach it either from the north shore or the Waianae side, but no roads wrap fully around this remote corner. At Oahu’s westernmost tip, Kaena Point State Park has been set aside as a state natural area preserve to protect nesting Laysan albatrosses and wedge-tailed shearwaters, Hawaiian monk seals, and native coastal vegetation.

About six miles off of Kaena Point, we are conducting the bulk of our research work on transects that cross the submerged Kaena Ridge. We are specifically interested in turbulence in waters around the ridge created by the interaction between the seafloor bathymetry and internal tides. One key research goal is to measure this mixing and to determine how it is affecting marine life.

Oxygen is a good indicator for biological activity in the ocean. At the surface, oxygen is in equilibrium with the atmosphere. The changes in oxygen concentrations with depth are mainly caused by biology, including phytoplankton (algae) producing oxygen. As you go deeper still, there is less light and thus less photosynthesis occurring, so less oxygen is produced. At the same time bacteria are eating up food there and producing carbon dioxide through their respiration.

So, oxygen levels can tell us a great deal about what’s happening at a given depth. But in areas of turbulent mixing, like the one we’re studying here at Kaena, clear depth gradients are swirled away.

One of our main goals is to collect water samples at a variety of depths along a series of waypoints on the ridge to measure for oxygen and other biological factors and look for gradients as well as what kind of biological activity is occurring in the ridge turbulence—with the oxygen giving us clues.

To conduct the sampling, the students have set up a CTD carousel stocked with spring-loaded collection bottles in an open position. We lower the CTD down near the seafloor or to 400m depth, whichever is shallower. Then we “fire” the bottles to close their lids and capture water at nine different depths as we tow the carousel back up towards the boat.

Each bottle is a capsule of the water column at a moment in time—brought to the surface intact. The students work quickly to preserve a portion of the collected water from each 12-L bottle.

The first and most delicate operation is to pull a sample for oxygen and argon content. Measuring the oxygen to argon ratio is a way of quantifying net community production, which is the difference between the amount of organic material produced by phytoplankton through photosnythesis, and the amount of organic material used up by bacteria–the process called re-mineralization.

Argon is helpful because it’s an inert noble gas, which means it’s not affected by biological processes. We measure argon at every station as a way of correcting for changes in oxygen not due to the biology we’re interested in. For instance, temperature changes and other non-biological factors can change oxygen levels, but also the argon, allowing us to calculate correction factors accordingly.

Because we’re interested in gases, it’s really important that the water does not come into contact with surface air intermixed with the collection bottles prior to taking the samples. So the sampler taps open the bottle, put some tubing in it, and let some water come out, overfilling the small sample bottle with about four times as much water as is needed to fill it. We do this to make sure that there are no bubbles in the bottles or the tubing that could throw off measurements.

Once we’ve had time to collect more samples and analyze them, we’ll be able to tell you more about what’s happening below us at the ridge. 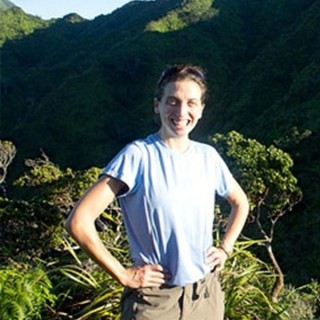 Pull of the Islands