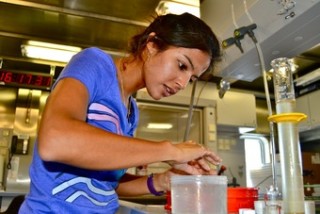 During the inaugural Schmidt Ocean Institute Symposium in November of 2013, Schmidt Ocean Institute (SOI) Vice President and Co-Founder Wendy Schmidt launched an initiative to inspire a deep passion for ocean sciences among students by bringing them out to conduct research at sea aboard the R/V Falkor.  At the time, SOI was already planning its collaborations with the University of Hawaii at Manoa in preparation for a series of scientific research cruises out of Honolulu.  As a result of this initiative, a new program of 2014 student cruises was born. On three separate expeditions in 2014, select student groups gained invaluable skills and experience at sea while working with some of the world’s most advanced oceanographic technologies and tools, available on R/V Falkor.  READ MORE 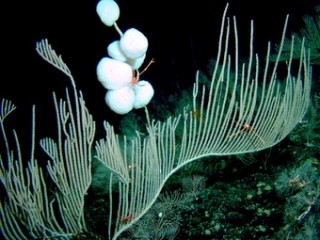 The Papahānaumokuākea Marine National Monument in the Northwestern Hawaiian Islands is the largest U.S. marine protected area, comprising some 362,000 square kilometers—an area almost as large as the state of Montana. The monument includes a range of critical marine habitats, yet over half its seafloor had never been mapped in detail due to limited availability of the high-resolution sonar systems required. On two cruises, SOI collaborated with researchers from multiple institutions to produce detailed seafloor maps of a significant portion of that remaining gap. In keeping with SOI’s mission, these were made publicly available as quickly as possible – a starting point for future discoveries and critical research in the region. READ MORE

Since their discovery in 1987, hydrothermal vent fields at the summit of the volcanic Loihi Seamount, near the island of Hawaii, have been the focus of intense research. But only recently did scientists discover that something unusual and important was also happening at the base of this seamount, 5,000 meters down. There, previously unknown bacterial communities that feed on iron may well be playing unappreciated roles in balancing ocean chemistry. Learning more about them could offer insights on the origins of previously unexplained geological features on Earth, or may even aid in developing search strategies for life beyond Earth. An expedition aboard Schmidt Ocean Institute research vesselFalkor gave scientists access to some of the most advanced deep ocean research technologies to enable research that significantly advanced understanding of the Loihi system and guide future research. READ MORE 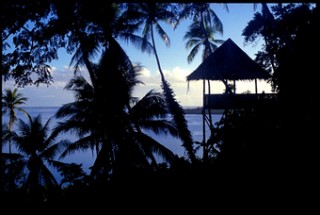 The Ontong Java Plateau is a massive, submerged seafloor platform north of the Solomon Islands that is slightly larger than Alaska. The largest volcanic eruption in the planet’s history likely formed the plateau, but just what caused that strange disgorgement remains a mystery. During October, Falkor took an international team to the region to search for clues that might help explain what happened. In the process, the team created seafloor maps that improved tsunami predictions for people living on Ontong Java’s atolls and that may also provide new information about the history of sea level change—currently rising—in the region. READ MORE

The very deepest reaches of the sea are one of the planet’s last true frontiers. That’s mostly because access to the deepest trenches has been severely limited due to a lack of support for needed technological advancements, and a resulting lack of access. But in November, Schmidt Ocean Institute helped  change that through collaboration with a team of biologists and geologists. The team worked aboard R/V Falkor to study one of the deepest place in the world—the nearly 11,000-meter-deep Mariana Trench near Guam. READ MORE 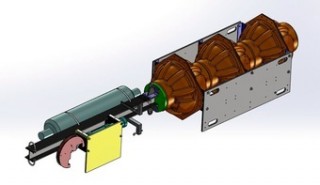 In December, Falkor returned to the Mariana Trench for research that complemented the November expedition, and built on work that began during explorer and director James Cameron’s 2012 DEEPSEA CHALLENGER expedition. The targets were two of the deepest spots in the world—the Sirena Deep and the Challenger Deep, both nearly 11,000 meters (36,000 feet) down. READ MORE