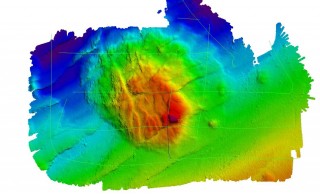 Last November, Research Vessel Falkor discovered a seamount (an underwater mountain). It was during this expedition focused on the biology and geology of the deepest part of the planet, the Mariana Trench, that the feature was exposed in waters off of Guam. The seamount is likely millions of years old, but went undiscovered until the Exploring the Mariana Trench expedition.

This month the International Hydrographic Organization and UNESCO Intergovernmental Oceanographic Commission approved Schmidt Ocean Institute’s application to name the seamount. Namesake of the research vessel that discovered the underwater mountain, Falkor Seamount has official been documented and commemorated. With high-resolution multibeam mapping, the team on Falkor was able to identify and extensively characterize the 2,100 meter seamount with a maximum depth of 8,700 meters.

Leighton Rolley, one of Falkor’s Lead Marine Technicians discovered the seamount. Leighton’s excitement to conduct research in the Mariana Trench was at high levels even before the discovery. “I first learnt about the Trench as a child from an atlas in my parents’ house.  To me, this book was simply magic, it showed the Earth’s surface in great detail, but the depths of the Trench remained a dark, mysterious and vastly unexplored world.”

A cruise of discoveries

Leighton was not the only one on this expedition to contribute to new discoveries. The science team aboard Falkor also used Schmidt Ocean Institute’s lander, an underwater elevator with tools and a camera on its platform, to conduct its research during the cruise. It was on one of the lander’s deployments that the deepest fish known to science was recorded some 8,143 meters down. The “ghost” fish named for its ghost-like appearance made headlines. Several other new species were also found during the month-long cruise. “I really hope that this new species will make it into an atlas that will inspire future generations to take up oceanography, just like it did for me thirty years ago” said Leighton.

The Mariana Trench expedition had many discoveries, but it is the newly named seamount that Schmidt Ocean Institute is excited about today. “It is an honor to have a namesake mountain in one of the deepest and least explored areas on the ocean” said Victor Zykov, Director of Research.  Falkor Seamount is not the first feature in the Mariana Trench region to be named after a ship, the area has a unique history of discovery.

Challenger Deep a short distance from Falkor Seamount, takes its name from the HMSChallenger, a British Royal Navy ship that undertook the first global marine research expedition in 1872, and made the first recordings of the areas depth. To enable her to probe the depths, all but two of the Challenger’s guns were removed and her spars reduced to make more space for science. Laboratories, extra cabins, and a special dredging platform were installed. The ship was loaded with specimen jars, alcohol for preservation of samples, microscopes and chemical apparatus, trawls and dredges, thermometers, water sampling bottles, sounding leads, devices to collect sediment from the sea bed, and great lengths of rope to suspend the equipment into the ocean depths. The HMS Challenger was the first organized expedition to examine the deep-sea floor and resulted in 50 volumes of descriptive oceanography called the Challenger Reports.

Research vessel Falkor follows in the path of Challenger advancing and supporting science at sea. We now carry modern equivalents of those instruments that were found on Challenger, to continue to better understand largely unexplored regions such as the Mariana Trench. Advances in technology have allowed Schmidt Ocean Institute to efficiently map and characterize the deep sea floor. For example, the hardworking crew aboardFalkor were able to run 393 km survey lines incorporating more than four million soundings to characterize the recently discovered Falkor Seamount.

Much of the deep ocean still remains unexplored, and Schmidt Ocean Institute’s goal is to provide a sea-going research vessel to scientists at no cost, to help speed the pace of science. Schmidt Ocean Institute co-founder Wendy Schmidt stated, “When we discover seabed features the size of the Falkor Seamount that rises over 2,000 meters from the seafloor, in an area we thought we understood, we vividly realize how little we understand about the world beneath the surface of the ocean. We are in our infancy in terms of exploration, discovery, and understanding of the connections that exist between our life on land and life in the Ocean.”

“We hope that this is not the last of our discoveries,” said Schmidt Ocean Institute Director of Research Victor Zykov. “We will be returning to the Mariana Trench this December to investigate hydrothermal activity and habitats in a relatively unexplored area of the region, the Mariana Back-Arc.” Partners from the University of Washington and Oregon State University will use Autonomous Underwater Vehicle (AUV) Sentry to find new hydrothermal vent areas in the back-arc area. While ships like Challenger may have started ocean going research, it is up to organizations like Schmidt Ocean Institute to continue the global mission of discovery through technological advancement.