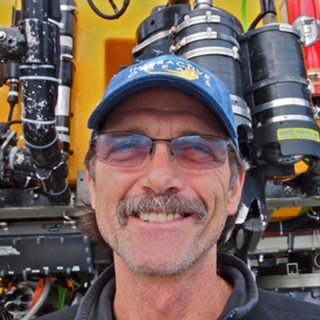 Steven (Steve) is a ROPOS ROV Technician with Sierra Offshore Services.  A part of the ROPOS team since 2003, Steve has acted as a pilot, LARS crane operator, and robotic manipulator operator and technician. He will be fulfilling all three of these roles during the cruise.

Steve brings extensive experience with ROVs and mechanical systems to the ROPOS team.  Originally a mechanical technician for the U.S. Army, he became involved in the marine industry in 1982 as a vessel engineer, and began piloting/engineering subsea ROVs a year later.  He specializes in deepwater robotics operations, with experience in cable installations and repair, pipeline installations, environmental and ecological surveys, subsea salvage, and scientific research.