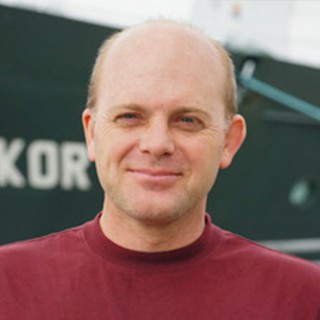 Steve Romaine is the head of the Water Properties Group at the Institute of Ocean Sciences, which provides oceanographic support to research missions in the Pacific and Arctic regions. This includes sampling protocols for dissolved oxygen, nutrients, salinities, and electronic measurements using CTD units.

Steve has a M.Sc. in biological oceanography from the University of Victoria with a specialization in zooplankton acoustics and dynamics, and he has spent considerable time at sea measuring the population dynamics of euphausiids or krill along both the British Columbia coast and in Antarctica.   He participates in various research missions including hake and euphausiid assessments from California to Alaska, oceanographic time series along the west coast of Vancouver Island, and SCUBA kelp forest surveys in Haida Gwaii.