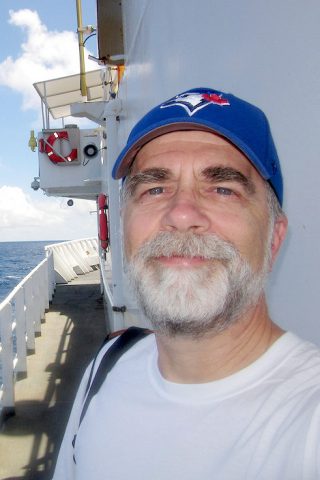 Dr. Scott C. France is a deep-sea biologist at the University of Louisiana at Lafayette. His research interest is the evolution and diversification of deep-sea invertebrates, in particular in deep-sea octocorals. He uses both genetic and morphological data to explore species diversity. He was attracted to a career in marine biology when, as a fine arts major, he took an elective course in oceanography and was captivated learning about the discovery of deep-sea hydrothermal vents. That new knowledge drove his desire to visit and explore the deep sea himself, and he immediately switched majors to Biology.

Scott earned his B.S. in Biology at Concordia University (Montreal, Quebec, Canada) and a PhD in Oceanography from the Scripps Institution of Oceanography, University of California, San Diego. He has held postdoctoral positions at the Woods Hole Oceanographic Institution, the University of New Hampshire, and Harvard University and taught Evolution at Bowdoin College. He was on the faculty of the College of Charleston from 1997-2003, and has been on the faculty at the University of Louisiana at Lafayette since 2004. Over his career, he has visited the deep-ocean floor using manned submersibles and ROVs in the Mariana Back-Arc Basin, Hawaiian seamounts, Galapagos Rift hydrothermal vents, Southern California borderland basins, Bahamas, Aleutian Islands slopes, and canyons and seamounts of the western North Atlantic. He has also had the good fortune to serve as lead scientist on three  Okeanos Explorer expeditions and share his passion for science and the deep ocean with the general public.