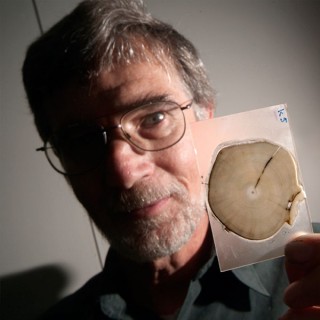 Ron Thresher got his Ph.D. in fish behavior and ecology at the University of Miami, and did post-doctoral work at Scripps Institution of Oceanography and the University of Sydney.  He joined the Australian Commonwealth Scientific and Industrial Research Organization in 1983, where he has undertaken research on topics ranging from the ecology of larval fish and deep-sea communities to impacts of climate change on marine populations and the development of recombinant genetic technologies to control invasive lower vertebrate pests.  He has worked for over 20 years on the development of proxies in the carbonate structures of marine and freshwater animals (otoliths in fishes, coral skeletons) and applying those proxies to resolving issues about the evolution and ecology.  For the last decade, this work has had a large focus on deep-sea oceanography and communities, and deep-sea corals in particular, driven in part by a need to develop long-term oceanic records for the Southern Ocean to complement modern instrumental records, and in part because of the threats posed by climate change and ocean acidification on deep-sea reefs.  In his spare time, Ron founded and directed the CSIRO Centre for Research on Introduced Marine Pests, leads a multi-institutional project aimed at developing novel recombinant technologies for controlling invasive mice, carp and oysters, is consulting on the risks involved in using genetic methods for managing disease-vectoring mosquitoes, and is revising the taxonomy of Tasmanian mayflies.