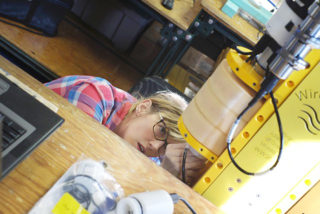 Melissa Omand is an Oceanographer with broad interdisciplinary interests. She applies her training in physics and physical oceanography to examine biogeochemical and ecological processes throughout the upper ocean and twilight zone. She is captivated by the challenges of making observations in a vast, and often harsh, ocean environment, and thrives upon designing or combining sensors, vehicles and other instrument platforms in creative ways to tackle these challenges. Some examples of tools that she uses in her research include: underwater gliders whose high endurance, detailed sampling capture background and rare events, a drifting WireWalker that uses wave-power to continuously, profile the upper ocean, a submersible holographic camera that collects rapid-fire images of plankton and marine snow particles, and specialized sediment traps that photograph and preserve sinking marine snow particles – supplying food for the deep ocean and sequestering carbon from the atmosphere. Her research focuses upon making observations that resolves variability in the biological pump over small scales (kilometers and days) that are not yet resolved in global ocean-climate models.

Melissa earned a B.Sc. in Physics from the University of Guelph in 2004. After graduation she spent time canoe guiding and skiing, and then returned to Guelph to work on simulations of x-ray induced emissions by Martian rocks (observed by the NASA rovers Spirit and Opportunity) in the Guelph PIXE group of Dr. Iain Campbell. Her desire to combine physics and earth science led her to the PhD program in Physical Oceanography at Scripps Institution of Oceanography, under advisors Drs. Falk Feddersen and Peter Franks. Her graduate work focused upon the mechanisms of transport and mixing of nutrients and red tides organisms in the inner shelf and surfzone. She used data from moorings and small-boats in conjunction with observations from a souped-up Jet Ski that measured physical and biological water properties in fine detail as they were stirred and mixed by breaking waves. After graduation in 2011, she moved to Cape Cod, where she was a postdoctoral associate with Dr. Amala Mahadevan at Woods Hole Oceanographic Institution. Here, she expanded her interests – writing papers on nutrient distributions, nutrient-density relationships, attenuation of sunlight, sinking rates of marine snow, and eddy-driven export of particulate carbon in the ocean. Since January 2015, she has held a faculty position at the University of Rhode Island’s Graduate School of Oceanography