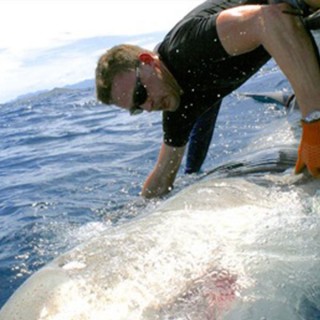 Mark Royer is a graduate student in the Shark Lab at the Hawai’i Institute of Marine Biology under Dr. Kim Holland and Dr. Carl Meyer. The lab studies the movement, behavior, ecology, and physiology of marine predators using novel tagging technology. Using various telemetry techniques, they hope to provide useful data for marine resource management and stewardship as well as gain a further understanding of the behavioral ecology of marine predators.

Mark’s research focuses on the thermal physiology of sharks in tropical waters and the role it has in their diving behavior and overall trophic ecology. He is very interested in the physiological capabilities of marine animals and how it affects their ecology and ability to utilize habitats varying in temperature and depth ranges.

Prior to working in the Holland Lab at the University of Hawai’i, he attended the University of North Carolina Wilmington (UNCW) with a major in marine biology with honors, and worked as an intern in the Jeffery Graham Lab at Scripps Institution of Oceanography. While interning at Scripps he assisted the then graduate student (now a Ph.D.) Andrew Nosal in his study on the seasonal movements and behavior of leopard sharks in the Southern California Bight. As an undergraduate at UNCW, he was able to work with the Marine Mammal lab and Marine Mammal Stranding Network headed by Dr. Ann Pabst and Dr. Bill McLellan. Though he has spent his time as a researcher studying sharks and other large predators such as jacks, he has always maintained an interest in the physiology of deep diving marine mammals.

While conducting or assisting with research in the field he gathers footage and photo-documents the various projects and shark tagging studies their lab conducts. This footage is used primarily for outreach purposes and, allowing the general public to see the lab in action in various fieldwork operations, and to see footage of their study animals equipped with various tags for telemetry. Photo documentation can also provide useful data by capturing distinguishing features on an individual animal, allowing scientists to identify and keep track of individual sharks, fish, or whales. On this cruise Mark will assist in the photo documentation of marine mammals for scientific use.