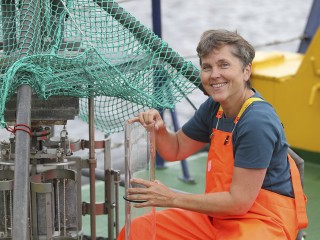 Maren Voss studied Biology and Biological Oceanography in Kiel, Germany, at the Institute of Marine Research (today called GEOMAR). Her PhD was on carbon and nitrogen stable isotope signatures in sedimenting particles and how the history and processes of the upper water column are reflected in these data. To learn the specific analytical method for stable nitrogen isotopes she received a scholarship to visit the Woods Hole Oceanographic Institute for half a year in 1989/1990. Since then her research has often used the information embedded in isotope signatures in marine particles or in nutrients in seawater to unravel processes and identify the sources of material in the ocean. After her PostDoc she build up a stable isotope lab at the Leibniz Institute of Baltic Sea Research, Warnemuende (IOW), Rostock, Germany.  To improve our understanding of the nitrogen cycle in the world’s oceans she successfully established numerous collaborations around the world and worked in the United States, Vietnam or Namibia.

One important aspect of her research has always been the role of humans and how they are changing the natural nitrogen cycle. Rivers are one major route through which nitrogen of anthropogenic origin reaches the ocean and fuels production, sometimes even hypoxia. One major outcome from this research is the European Nitrogen assessment where she wrote the Chapter 8: Nitrogen processes in coastal and marine ecosystems. Another major field of research is focused around nitrogen fixation which is a natural process that fertilizes the oceans. Only specialized organisms in the phytoplankton community are capable of fixing nitrogen. In recent years it has been shown that river plumes establish good environments where some nitrogen fixers grow especially well. This is one of the reasons why Maren Voss received funding from the German Science Foundation (DFG) and participates together with a PhD and a Masters students in the R/V Falkor cruise to the South China Sea.

Today Maren Voss leads a working group at the IOW with 5 PhDs a PostDoc and graduate and undergraduate students at the IOW.