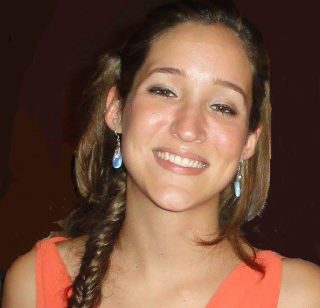 Leticia Cavole is a third-year graduate student at Scripps Institution of Oceanography at the University of California San Diego. A native of Brazil, Cavole grew up in the small countryside city of Barretos in the state of Sao Paulo.

She received her undergraduate degree in oceanography at the University Federal of Rio Grande (FURG), the oldest and one of the most highly regarded marine science programs in Brazil. During her undergraduate in Oceanography, Leticia worked with fish population dynamics through the use of ear bones (otoliths) to analyze how fish grow under different habitat conditions in the Southern of Brazil  and to investigate the impact of historical fishing on their population. Leticia  also traveled to the Amazon to investigate the illegality of the trade of its most emblematic fish species Arapaima spp. and later worked in a federal government agency to analyze fisheries crimes of the industrial sector in the Southern of Brazil.

Leticia is now studying marine biology in the lab of Scripps scientist and alumnus Octavio Aburto. Looking ahead to her PhD studies, she is trying to understand the influence of temperature, fishery pressure, and oxygen levels on fish growth. To address this question, she is using fishes from coastal environments of Latin America and the deep-sea fishes of the California Current Ecosystem. Environments such as coastal mangroves or deep-sea oxygen minimum zones are particularly sensitive to climate change and human impacts. A warming ocean will potentially increase the temperature inside small mangrove lagoons and expand the Oxygen Minimum Zone (OMZ) in the California Current Ecosystem. This may decrease the resilience of fish populations to the impacts of overfishing.