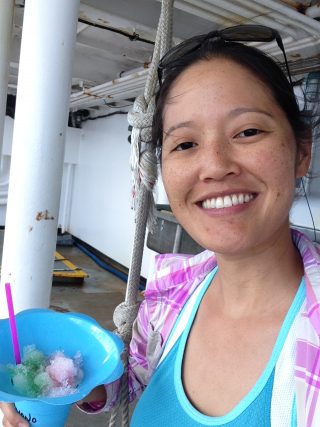 Kym Yano was born and raised in Honolulu. During middle school camp, she had an epiphany that Hawaii is absolutely GORGEOUS. At that moment, she knew her future would involve protecting the islands she calls home. In fact, her childhood dream job was to study Hawaii’s whales and help them thrive in the vast turquoise ocean…aside from singing for a Disney animated film (inspired by Disney’s The Little Mermaid). She graduated with a B.S. in Biology and B.A. in Psychology from the University of Hawai’i at Manoa, then spent 10 years in Seattle at the Alaska Fisheries Science Center. She worked with the Polar Ecosystems Program in Seattle, where she flew a lot of aerial surveys for harbor seals along the coastline of Alaska and for ice-associated seals (spotted, ribbon, bearded, and ringed) over the frozen Bering Sea. She joined the Cetacean Research Program ohana in Fall 2015, where she wears different hats of survey coordinator, UAS pilot, dorsal fin ID specialist, and team support.