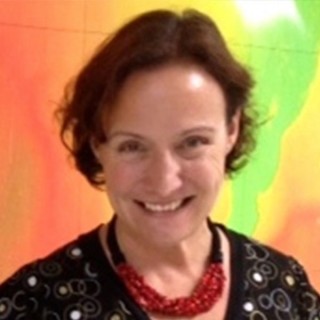 Kim Binsted received her B.S. in physics at McGill (1991), and her Ph.D. in artificial intelligence from the University of Edinburgh (1996). Her thesis topic was the computational modeling and generation of punning riddles, and her program, JAPE (Joke Analysis and Production Engine), generated puns such as “What do you call a Martian who drinks beer? An ale-ien!”. She then went to Japan, where she conducted research at Sony’s Computer Science Laboratories on human-computer interfaces, and then started a company, I-Chara KK, which developed social software agents for mobile phones. In 2002, she joined the faculty of the Information and Computer Sciences Department at the University of Hawaii, where she does research on artificial intelligence, human-computer interfaces, and long-duration human space exploration. She is also working on an M.S. in planetary geology, attempting to characterize the deuterium-hydrogen ratio in the primitive Earth mantle.

Kim is a co-investigator at the UH-NASA Astrobiology Institute, which formed in late 2003. She was a NASA Summer Faculty Fellow at Ames Research Center in 2003 and 2004, where she worked on sub-vocal speech recognition technology in the Neuroengineering Lab. She was chief scientist on the FMARS 2007 Long Duration Mission, a four-month Mars exploration analogue on Devon Island in the Canadian High Arctic. In 2009, she spent her sabbatical as a visiting scientist at the Canadian Space Agency (CSA), working on the CSA’s planetary analogues program. She is now a co-investigator on a space food study at HI-SEAS (Hawaii Space Exploration Analog and Simulation, hi-seas.org), and the principal investigator on the next three years of HI-SEAS missions, which will include four-, eight- and twelve-month missions.

Her hobbies include flying, diving, kayaking, cooking, and improvisational comedy.