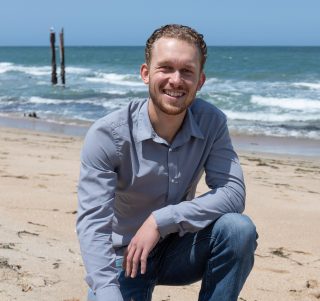 Joost Daniels is a senior research technician in the Bioinspiration Lab at the Monterey Bay Aquarium Research Institute (MBARI). His education includes a bachelor’s and master’s degree in applied physics from Eindhoven University of Technology in The Netherlands, with a specialization in plasma & radiation physics and a minor in sustainable energy technology. As part of his master’s degree Joost did an internship at Lawrence Berkeley National Lab (LBNL) in California where he worked on improving diagnostics and performance of plasma-based particle accelerators. In this work, he worked on some of the most powerful pulsed lasers in the world. He enjoyed working at LBNL and living in California so much that he stayed on to earn his PhD in applied physics at the same lab, through Eindhoven University of Technology. Meanwhile, after taking various marine science courses at Moss Landing Marine Laboratories in Moss Landing, California, Joost got involved with the white shark project at the Monterey Bay Aquarium, working as an intern on acoustic tracking data of white sharks along the California coast and inside the San Francisco Bay. After earning his PhD degree in December 2017, Joost started his current job at MBARI, working on lab-based and deep-sea imaging experiments, where he utilizes his experience in photography and laser technology on a daily basis.