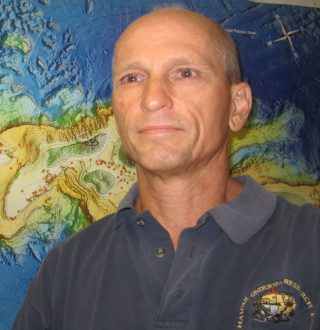 Dr. John R. Smith is an Oceanographer at the University Hawai‘i at Mānoa in the School of Ocean and Earth Science & Technology where he carries out research and a variety of specialized activities. He has used various acoustical and in situ methods to study the seafloor and sub-seafloor in many of the world’s oceans, specializing in multibeam bathymetry and backscatter data collection, processing, and interpretation. His research projects have focused on the mapping of seamounts and the unstable flanks of oceanic islands that can fail, producing landslides and tsunamis. Dr. Smith has also become involved in deep and shallow-water benthic habitat mapping in support of fisheries assessment and management, along with other applied research projects such as environmental studies prior to seafloor mining, and engineering surveys preceding the installation of underwater power cables and seawater pipelines for future alternative energy ventures. As more areas of the high seas have been set aside as marine protected areas, he has taken on projects in these regions to provide critical baseline and other data to accelerate discovery, delineate features for more targeted study, and assist with resource management.

John received his Bachelor of Science degree in Geological Oceanography from Florida Tech, worked in the commercial offshore petroleum exploration industry for several years in the Gulf of Mexico and Caribbean, and then attended graduate school at the University of Hawai‘i at Mānoa for his Masters and Doctoral degrees, both in Geological Oceanography as well. He took a position with the Hawai‘i Undersea Research Laboratory, where he served as the lab’s Marine Geophysical Specialist, managing their sea floor mapping operations. Later, he became the Science Program Director, administering all aspects of the scientific program. This will be John’s fourth cruise on Falkor, his second highest latitude expedition ever, and he’s glad it occurs during the northern hemisphere summer!

He has been Principal Investigator for previous cruises mapping the Papahānaumokuākea Marine National Monument (both Leg One and Leg Two), as well as an expedition mapping Johnston Atoll.