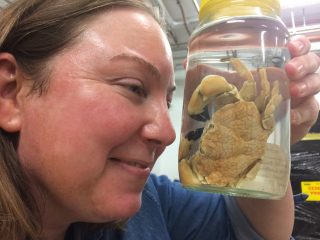 Jenelle Ritchie is a Project Technical Officer in the Aquatic Zoology department at the Western Australian Museum. She received a BSc. in Conservation Biology from Murdoch University, and was employed at the CSIRO before commencing work at the museum. During her employment at the museum over the last 12 years she has worked on many projects, such as the Western Australian Marine Science Institute (WAMSI) Kimberley Marine Research Node 1.1.1, which included three expeditions to remote waters off the Kimberley. The past two years has also seen Jenelle work extensively on marine exhibitions for the New Museum Project which is due to open in 2020. Jenelle keenly enjoys communicating marine science to the public and engaging with young audiences through the museums public education programs.