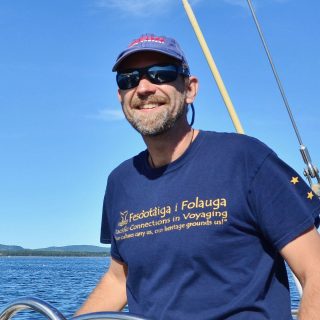 Jan Witting is a biological oceanographer with long-running interests in the Sub Tropical and Equatorial Pacific, where he has served as Chief Scientist on more than 20 research cruises. His work broadly addresses the linkage between climate variation, circulation, and biological production in the tropical and subtropical oceans, where he studies the effects of changing primary production on the structure of pelagic food webs and the ultimate consequences to Pacific fisheries and the human communities that rely on them.

Jan received his Ph.D. from Northeastern University, where he also completed a postdoc in underwater robotics. On board, he will be assembling a real-time picture of the state of the ocean in the Cafe as it relates to questions the expedition is asking about white sharks. This work will involve data from daily CTD/rosette deployments, from shipboard acoustic instruments, and from observations from the Saildrone and Slocum Glider autonomous robotic platforms that will be surveying the Cafe. Oceanography aside, Jan is also an avid birder at sea, and is known for his on-deck rescues of shearwaters, petrels, boobies, and terns.