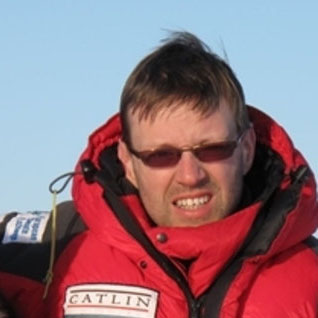 Dr. Oliver Wurl is a scientist and head of the group “Processes and sensing of marine interfaces” at the Institute for Chemistry and Biology of the Marine Environment (ICBM) at the University of Oldenburg, Germany. His research interests include the air-sea interaction, sea surface, carbon cycling and aerosol chemistry, and using that knowledge to contribute to a better understanding of the ocean’s role in climate change. His group “Sea Surface” investigates the sea surface microlayer and its effects on interactions between the ocean and atmosphere. Wurl’s group developed new technology to investigate processes at the sea surface. This technology, a remote-controlled catamaran and drifting buoy, is applied on this cruise to deepen the understanding how interfacial processes at the sea surface controls the exchange of CO2 between the ocean and atmosphere.

Dr. Wurl received his Ph.D from the National University of Singapore, and did his postdoctoral research at the Institute of Ocean Science (BC, Canada), Old Dominion University (VA, USA), and the Institute of Baltic Sea Research (Germany). He was awarded with Starting Grant from the European Research Council to establish the group “Processes and sensing of marine interfaces” at ICBM, the only group worldwide investigating biochemical processes at the sea surface in fulltime. He participated in more than 15 oceanographic research cruises and participated in two British Arctic expeditions at the magnetic North Pole. He was the Chief Scientist for the 2016 “Study of the Sea-Surface Microlayer and Air-Sea Boundary” expedition.