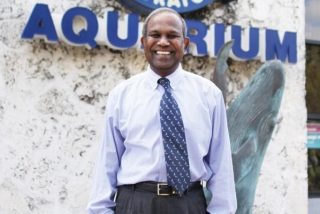 Kumar Mahadevan is the former President and CEO of Mote Marine Laboratory, a research facility that has laboratories, an aquaculture research park, and an aquarium in Sarasota, and field stations in the Florida Keys and Charlotte Harbor. He retired in 2013 after 27 years at the helm. Under his leadership, Mote Marine Laboratory grew from a small research facility to an internationally recognized laboratory for marine science and a local and US treasure for teaching adults and children about marine conservation. Dr. Mahadevan joined Mote in 1978 as a research scientist, upon completion of his Ph.D. in Oceanography from Florida State University (FSU) in 1977 and had served as its President/CEO since 1986. He has also held numerous other leadership roles, including President of the National and Southern Association of Marine Laboratories, Chairman of the Florida Coastal Ocean Observing Consortium, member of the Florida Governor’s Ocean Committee, a founder of the Florida Ocean Alliance, President of the Association of Marine Laboratories of the Caribbean, Vice Chairman of the Gulf of Mexico Marine Research Board, a founding board member of the Harte Research Institute of Gulf of Mexico, and a trustee of the National Marine Sanctuary Foundation. In community service, he is a long time Rotarian and has served as President of the Rotary Club of Sarasota Foundation.

Dr. Mahadevan was a National Academy scholar in biology in India during 1969-1971. At FSU, he trained as a deep-sea benthic ecologist and conducted studies at two deepwater munition dumpsites in the Atlantic Ocean, barobiological studies off Point Barrow, Alaska, and studies of the impact of refinery effluents in the Persian Gulf. Subsequently, his research transformed at Mote to ecological studies of various environmental stressors of thermal effluents, domestic waste, and stormwater on benthic communities of Tampa Bay, Sarasota Bay, Charlotte Harbor, and the Gulf of Mexico.

Since retirement, Dr. Mahadevan has volunteered as President Emeritus of Mote Marine Laboratory, trustee emeritus of the National Marine Sanctuary Foundation, an emeritus member of the National Association of Marine Laboratories, and serving as an at large member of the Florida Ocean Alliance Executive Committee. He also serves as a Trustee of the Mote Scientific Foundation, a private family charitable foundation.