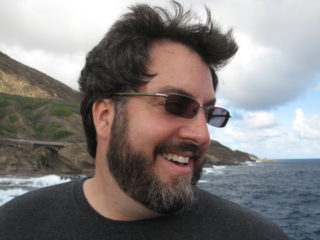 Christopher Zappa grew up north of Boston, Massachusetts. He attended Columbia University as an undergraduate and earned a Bachelors of Science in Mechanical Engineering in 1992. It was there that he developed his strong interest in fluid dynamics. In 1992, he moved to Seattle to attend the University of Washington and resided at the Applied Physics Laboratory for his entire graduate career. He received a Masters in Engineering in 1994. Upon receiving his Ph.D. in 1999, Christopher accepted a Postdoctoral Scholar Award at the Woods Hole Oceanographic Institution. He won the 34th Lorenz G. Straub International Award in 2001.  Christopher joined Lamont-Doherty Earth Observatory of Columbia University Doherty as an Associate Research Scientist in October, 2003 and has been a tenured Lamont Associate Research Professor since 2010.

Zappa has been a leader in the field of air-sea interaction since 1992 with extensive in situ and observational-based expertise. He was an ONR Young Investigator from 2004-2007. He is dedicated to understanding the processes that affect ocean-atmosphere interaction and their boundary layers. His focus includes wave dynamics and wave breaking, the effect of near-surface turbulence on heat, mass, and momentum transport, airborne infrared, multispectral, and polarimetric remote sensing, upper-ocean processes, polar ocean processes, coastal and estuarine dynamics.  Zappa is a member of the NASA Sea Surface Temperature Science Team, the UNOLS Science Committee on Oceanographic Aircraft Research (SCOAR), and the Member of the Air-Sea Interaction Scientific Committee of the American Meteorological Society. He has nearly 50 refereed papers.

Zappa has led a continuing evolution of the development of measurement systems for air-sea interaction, heat exchange and small-scale processes. He has developed an airborne infrared dual-imaging technique to characterize sea surface temperature variability at scales ranging from O(1m) to O(1km).  He has worked to develop imaging techniques that use polarization of visible radiation to quantify the phase-resolved fine-scale surface roughness features at air-water interfaces. Zappa was a Co-PI on the IcePOD program, a 5-year effort to develop a compact, airborne, polar instrumentation suite that can capture the dynamics of the changing polar regions, focusing on ice/ocean processes, targeting science missions such as mapping the sea ice and outlet glaciers surrounding Ross Island or the draining systems from large subglacial lakes in East Antarctica.   Recently, Zappa was a PI on the NASA project MIZOPEX that utilizes UAVs (ScanEagle and Sierra) to measure coupled air-sea-ice processes within the marginal ice zone.  He has continued this work with funding from the Moore foundation to develop new payloads for UAVs that include infrared and visible broadband imaging, hyperspectral NIR/VNIR imaging, longwave and shortwave broadband radiative fluxes, meteorological fluxes (momentum, sensible, latent, aerosol), atmospheric dropsondes, and air-deployed ocean microbuoys.

Zappa has extensive experience in managing scientific projects and a strong history of working on large-scale collaborative field experiments.  Zappa has lead groups on a number of multi-disciplinary multi-investigator projects including the three GasEx campaigns (1998, 2001, 2008), and the Office of Naval Research DRIs Coupled-Boundary Layer, Air-Sea Transfer for Low to Moderate Winds (CBLAST-Low; 2001-2003), Radiance in a Dynamic Ocean (RaDyO; 2008-2009), and Coupled Air-Wave-Sea Processes in the Subtropics (DYNAMO; 2011). During the recent DYNAMO field season aboard the NOAA P-3 and the CBLAST-Low field program aboard a Cessna Skymaster, he led the efforts in airborne IR imagery of ocean skin temperature.