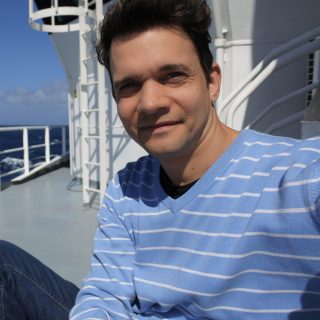 Originally from northern Germany, Christian is now staff researcher at the Marine Geoscience department at GNS Science in New Zealand. After finishing school in provincial northern Germany, he joined the University of Kiel to study marine geology. A few years later he received his Diploma from the University of Kiel, followed by a PhD in marine geology from Germany’s largest ocean research institute GEOMAR in 2008. After another postdoc position at GEOMAR, Christian moved to New Zealand to join GNS in late 2009.

Christians research focusses on submarine volcanoes and uses lava geochemistry to understand processes occurring in the underlying Earth’s mantle and crust. Of particular interest to him is how elements (including metals) move from the source to the seafloor. He has been on 14 seagoing research expeditions to the Galapagos region, Azores archipelago, Louisville seamounts, Tonga-Kermadec arc, Manihiki Plateau and around New Zealand. This expedition is Christian’s first trip on the RV Falkor on which he will sample hydrothermally altered samples to understand how these rock form on the seabed.