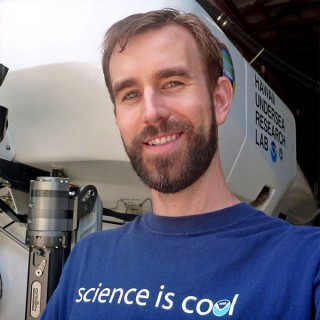 Brian Shiro is a Ph.D. candidate in the Department of Geology and Geophysics at the University of Hawaii at Mānoa, where he applies geophysical exploration techniques to search the subsurface for resources that could support life on other planets.  He is also a geophysicist at the NOAA Pacific Tsunami Warning Center, where he applies operational science principles to continuously monitor the globe for earthquakes and access their tsunamigenic potential, and to issue tsunami warnings as needed. In a career spanning nearly fifteen years, Brian has participated in numerous geophysical field expeditions to remote locations around the globe, including Antarctica, Alaska, Canada, and various tropical Pacific islands.  His sea experience includes serving as a mapping watchstander on a 15-day cruise aboard the NOAA ShipOkeanos Explorer in 2010, where he operated the multibeam echosounder and mapped seafloor features between Guam and Hawaii.

Brian holds a B.A. (2000) with majors in integrated science, geology, and physics from Northwestern University, a M.A. (2002) in earth and planetary sciences from Washington University in St. Louis, and a M.S. (2010) in space studies from the University of North Dakota.  He is also a graduate of the International Space University’s Space Studies Program (2005), where he specialized in wildfire forecasting using space technologies.  Brian was a Highly Qualified NASA astronaut applicant in 2008 and 2012, placing him within the top 10% of applicants.  Since then, he has completed commercial astronaut training in zero-gravity parabolic flight, high-gravity centrifuge, emergency survival, and spatial disorientation.  He is also a father, private pilot, scuba diver, avid cyclist, marathon runner, and regular speaker at area K-12 schools on earth and space science topics.