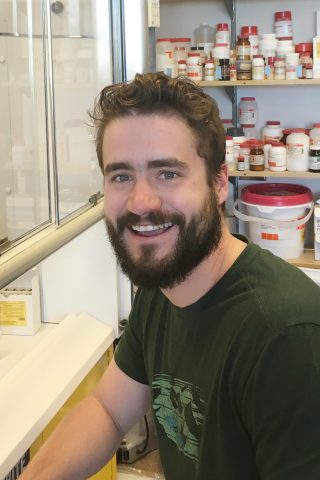 Despite being raised in the landlocked prairies of Regina, Saskatchewan, Brett became intrigued with the ocean at a young age. He received his BSc (hons) in Marine Biology from Dalhousie University in 2016 where he developed a passionate interest in the processes that facilitate ecosystem function and the effect of human induced stressors on marine ecosystem dynamics. He completed his undergraduate dissertation on the impacts of ocean acidification on coral reef metabolism while studying as a summer research intern at the Bermuda Institute of Ocean Sciences (BIOS). Following the completion of his undergraduate degree, he returned to BIOS as an instructor for the Marine Invertebrate Biology fall course. During his second term at BIOS, he also served as research assistant in the resident Microbial Ecology Lab where he worked on microbe community turnover in seasonally hypoxic bottom waters.

Brett is currently a PhD student at the University of Victoria’s School of Earth and Ocean Science, studying benthic ecology and microbiology. His current work, funded by Canadian Healthy Oceans Network, focuses on determining the separate and cumulative impacts of hypoxia and bottom trawling on deep-water benthic microbial communities as well as their associated ecosystem services on the continental slope off Vancouver Island. Brett will be analyzing deep sea sediment cores aboard the R/V Falkor to determine oxygen profiles, microbial abundance, and the diversity of denitrifying bacteria. He aims to gain a broad-scale regional understanding of benthic community structure in the North Pacific with which he can draw comparisons to areas with higher degrees of human influence.