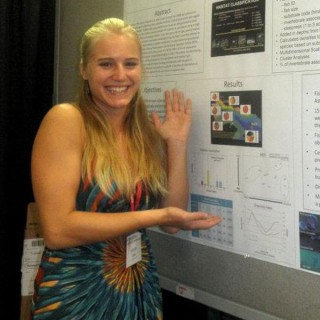 Astrid Leitner completed two bachelors degrees at the University of California at Santa Cruz in 2012. She has one degree in Marine Biology and another degree in Earth and Planetary Sciences. During her undergraduate career she focused mainly on coastal ecology, working for the Partnership for Interdisciplinary Studies of Coastal Oceans (PISCO). Astrid began her career working in the intertidal on a barnacle recruitment project. Later on, she began to work as an AAUS scientific diver in the California Kelp Forests studying the impacts of local, small-scale physical processes on the rockfish community. Additionally, she spent one semester at STARESO (Station de Recherches Sous-marines et Oceanographiques) in Corsica, France where she studied factors influencing schools of Chromis, the Mediterranean damselfish. Astrid also completed an NSF Research Experience for Undergraduates (REU) program at Oregon State University where she worked on her first deep sea project. While in Oregon, she worked on the fish community in Astoria Canyon, a large submarine canyon beginning at the mouth of the Columbia River. For this project Astrid analyzed Remotely Operated Vehicle (ROV) footage from depths ranging from 100 to 1400 meters.

Astrid’s work with the REU program led her to begin a graduate career at the University of Hawaii at Manoa with Professor Jeffery Drazen and the deep sea fish ecology lab. Here, Astrid got involved in several projects. First, she is working on the ABYSSLINE project, developing an ecological baseline for the abyssal plain ecosystem in the Clarion-Clipperton fracture zone. Additionally, she is involved in the pelagic food web project, studying the role of deep-living, migrating micronekton in the trophic web of the central North Pacific. Last, Astrid is working on seamount communities, examining what factors are responsible for creating and sustaining these biologically rich and diverse communities in the otherwise sparsely populated pelagic realm. For her work on these projects Astrid has taken part in two oceanographic research cruises, with many more to come.