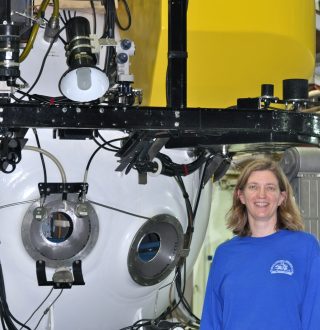 Dr. Amy Baco-Taylor is an Associate Professor in the Department of Earth, Ocean and Atmospheric Sciences at Florida State University. Amy’s general research interests are in the evolution, ecology, and connectivity of benthic marine organisms. There will always be an imperative for basic research, but the reality of rising anthropogenic impacts on the world’s oceans means that scientists must also consider their species or ecosystem of interest in a more applied context.  Amy’s research merges both of these directives by using traditional ecological tools alongside advanced genetic/genomic tools to answer basic questions about the ecology of marine benthic invertebrates, with a goal of informing management and conservation of these species.

Amy’s work currently focuses largely on seamounts and deep-sea corals. Seamounts are at the forefront of marine conservation efforts worldwide because of impacts to seamount habitats from trawl and long-line fisheries, as well as potential cobalt-manganese crust mining. Most of Amy’s research has been exploratory in nature and has included descriptions of the distributions of species on seamounts, descriptions of new species, coral phylogenetics, population genetics of deep-sea precious corals, invertebrate associations with deep-sea corals, habitat suitability modeling for deep-sea species, and the effects of anthropogenic impacts on seamount megafauna.

Since her first submersible dive in 1995, not counting telepresence, Amy has participated in >40 oceanographic cruises off Florida, Hawaii, Alaska, California, the Gulf of Mexico, the Bahamas, New Zealand, and Antarctica. She has led 134 dives on the Pisces IV and V submersibles as PI or lead PI, and Alvin dives as Co-PI, with additional dives with the Turtle and Johnson-Sealink II submersibles. She has also led or participated in numerous ROV dives with the Jason II, ATV, Scorpio, Tiburon, and RCV-150, and with the AUV Sentry, to depths reaching 5200m.