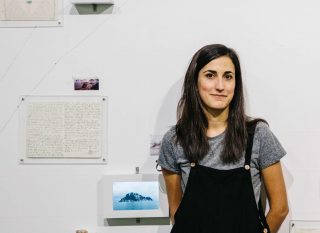 Aly Ogasian attempts to re-orient herself in a contemporary world dominated by data and technology, where the romantic and adventurous spirit of discovery has been lost or forgotten. In these zones, science and technology give rise to the nebulous, the enigmatic, the mysterious — the primary goal is to “make sense” rather than to objectively know.

Rather than grapple with the “polarity” between the arts and sciences, her work argues that both fields operate in a territory of wonder that exists at the border between sensation and thought. Within this context, wonder is connected to an instance of “new knowing”, a re-encountering of familiar terrain.

Her installations incorporate a variety of media including drawing, video, sculpture, writing and performance and a range of processes such as casting, scanning, 3D printing, and frottage. Within each installation, a two-dimensional image becomes three-dimensional, an object shifts to image, material to information, digital to analog. By illuminating the process or ‘history’ of each element in relation to the installation as a whole, each component –drawing, projection, sculpture – functions as a single point in a larger constellation.