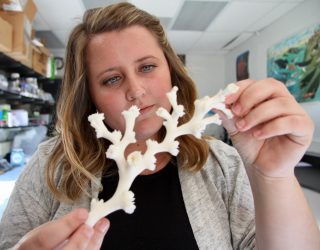 Alexis is interested in the diversity and distribution of deep-sea coral species on seamounts in the remote Central Pacific with a focus on the Phoenix Islands Protected Area (PIPA). She will be conducting a preliminary video assessment of large-scale patterns of coral abundance and diversity across seamounts in PIPA. Additionally, she is interested in cataloguing and preserving deep-sea coral specimens for DNA barcoding to better understand the phylogenetic diversity of corals on seamounts. As many of these seamount ecosystems in this area of the Pacific have never been explored before, she aims to provide an idea of how environmental conditions influence variability of coral community composition. In remote marine protected areas like PIPA, collections of voucher coral species and their symbiotic organisms will help better establish how seamounts in this area fit into a larger biogeography of the Pacific Ocean.

Alexis is a PhD candidate in Dr. Erik Cordes’ lab at Temple University. In addition to her work on coral abundance and diversity across seamounts in PIPA, her research involves understanding how humans are influencing deep-sea coral communities. To better understand this, she is conducting multiple-stressor experiments exposing Lophelia pertusa colonies to various levels of pH, temperature, and oil-dispersant mixtures. Assessments of coral health are recorded during and after exposures by examining both the physiological and transcriptomic response. Before starting her PhD at Temple University, Alexis completed a M.Sc. in Ecology, Evolution, and Conservation Biology at San Francisco State University and the California Academy of Sciences. During her time at CAS she analyzed the axial elemental composition of different octocoral families. Her first experience with marine research was at Florida Institute of Technology, where she earned a B.Sc. in Biological Oceanography.