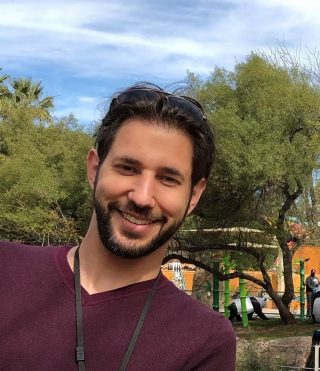 Aaron Farber grew up outside of Albany, NY. He attended Columbia University as an undergraduate and earned a Bachelors degree in Astrophysics in 2005. During that time, he became interested in remote sensing systems and the enabling technology and learned the value of bridging the gap between the science and the engineering required to capture the data.

Aaron subsequently moved to Tucson, AZ to complete his Masters and Ph.D. in aerospace engineering at the University of Arizona. His dissertation focused in the area of gamma-ray imaging, image reconstruction and remote sensing for which he earned a U.S. Patent. During this time, his lab was the 100kW research nuclear reactor on campus. He earned his Reactor Operator license and oversaw the decommissioning and dismantling of the reactor in 2011.

Outside of his studies, Aaron had a passion for flight, starting flight lessons at 15 and earning his private pilot license at 17. He subsequently earned additional certifications including his CFI. Aaron worked as a flight instructor throughout his graduate school time and upon graduating started working on UAVs. Aaron has worked on integrating and flying a multitude of science payloads including hyperspectral cameras, lab-on-a-chip chemical sensors and meteorological and atmospheric sensor packages. He has flown with the NOAA Hurricane Hunters, flying air-launched UAVs into hurricanes and spent time in the arctic with the LDEO team members. Since joining L3 Latitude in 2017, he has focused on enabling the Hybrid Quadrotor (HQ) technology for use in scientific and commercial purposes. He is very excited about continuing the work with LDEO and Schmidt during this cruise and will miss his wife and 2 year-old son very much!