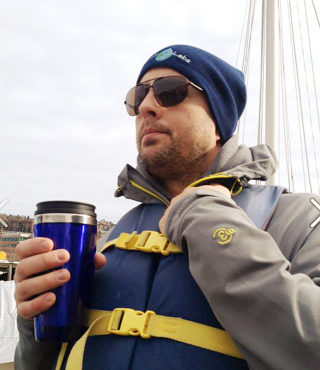 Wayne Slade is an oceanographer and engineer interested in understanding particles in the coastal and open oceans. These particles can range from small to large plankton, their detritus, sediments, and aggregates of all the above, “marine snow”—a key component of the “biological pump” responsible for moving carbon through the atmosphere into the ocean and ultimately sequestered to the deep sea. Specifically, Wayne develops technologies for characterizing these particles in the ocean using multi-wavelength, multi-angle, and polarized optical scattering measurements. Wayne has extensive experience in designing and deploying optical sensor systems in coastal and open ocean environments, in design and execution of laboratory studies using optical sensors, in the analysis of data from field and laboratory experiments, and in theoretical modeling of the optical properties of particles.

Wayne is an early career scientist, having received a Ph.D. in Oceanography in 2011 from the University of Maine, focused on ocean particle optics, and M.S. in Electrical Engineering in 2004, focused on signal and image processing and intelligent algorithm design. During the Sea to Sky Particle Investigation he will deploy a prototype sensor for measuring particles ranging in size from sub-micron pico-phytoplankton to micro-phytoplankton, compare the measurements with other sensor technologies, and investigate the extension of particle size measurements to ocean color remote sensing.