“No Species is an Island”

The Australian streetwear brand, Jungles Jungles, and Nautilus Ocean, a branch of Nautilus Magazine, have partnered to create the clothing line, “No Species is an Island,” with the intention of raising awareness for Ocean conservation and the 30×30 Campaign. The 30×30 campaign is an initiative focused on reserving 30% of the Ocean as marine protected areas by 2030.

The clothing aims to bring messages of scientific discovery and conservation into the fashion community. Designs feature ROV SuBastian imagery from the Visioning the Coral Sea Marine Park and The Secret Lives of Whales expeditions. Proceeds from clothing sales are donated to non-profit organizations focused on the 30×30 campaign. 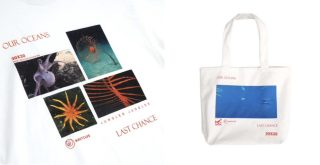 Jungles Jungles is a surf-inspired streetwear line founded by Jack Ferguson based out of Melbourne, Australia. The clothing often features irreverent slogans and psychedelic prints and is certified by the Business Social Compliance Initiative (BSCI). A BSCI certification means the brand works to be fair to workers at all levels of its supply chain.

The Nautilus Magazine Ocean Channel is a Schmidt Ocean Institute grant recipient and works to make science reporting direct, accessible, and as interesting as possible for wide-ranging audiences.

The Spirit of Falkor

In November of 2021, Carol Mickett and Robert Stackhouse sailed as the final Artists-at-Sea aboard R/V Falkor while the ship traveled across the Atlantic Ocean to pass the baton to R/V Falkor (too). They were tasked with creating a piece to commemorate R/V Falkor and all the work the ship did in service of Ocean exploration.

Carol and Robert originally planned to paint the ship surrounded by a luck dragon with a list of all the places it had been. Once they arrived on the vessel, they found themselves inspired by R/V Falkor’s crew, and determined they were (and still are) the embodiment of the “Spirit of Falkor.”

The final painting is now complete and portrays the original R/V Falkor on an Ocean-colored inspired background, surrounded by a luck dragon and the signatures of the crew. The painting  is  27 3/8” x 57” in dimension and will be prominently displayed on R/V Falkor (too). To learn more about Carol and Robert’s journey, click here.

Carol Mickett and Robert Stackhouse have been making art collaboratively for over 22 years.  They make two-dimensional and three-dimensional place-appropriate art that focuses on water and water related issues. Museums, private collectors, commercial developers, and state and local governments collect and commission their work.  Mickett and Stackhouse have completed a number of ambitious large-scale projects during their years of collaboration, including a 160 ton Indiana limestone sculpture for the Michael Graves Artspark in Indianapolis.

We invite you to share the newsletter with your friends and encourage them to subscribe, so they do not miss our first-look at Schmidt Ocean Institute’s activities.