I have seen incredible things while at sea. Alongside the R/V Falkor, I have watched flying fish leap and glide. This week on the ship we mapped two seamounts in international waters off the Baja Peninsula. I was struck by how alive the data felt. Obviously, there are real unmapped seamounts below the surface of the ocean, but because I cannot readily see the seamounts, they just feel theoretical. As they are mapped over, they solidify for me. The multibeam mapping is amazing because it takes something ephemeral (like shooting beams of sound over hidden mountains) and makes them into tangible 3D forms.

These are the kinds of data conversions I try to create in my art. In some of my other work I have taken ephemeral environmental audio data and made it into glass sculptures – like my piece “Great Barrier Reef Sound” that turned the sound the coral makes into a glass sculpture in order to make the sound tangible and preserve it. Similarly, the piece  “Sound of the San Francisco Fog” cast a recording of the sound of San Francisco’s fog in glass.

New Forms New Life
In my last post, I talked about using art to humanize data, but I also think art has the potential to give data new life. One of the reason most of my sketches generally animated is because I like to tell a living story. Data can do this too. Just like the multibeam mapping system gave tangibility to the seamounts, I believe art can add new dimensionality and animated qualities to data. With my drawing robot drawing out the data, I am giving this information new life on a surface that is conducive to painting in some of the more narrative details later.

The robot just started drawing data in the past few days. My goal is to have it draw the seamounts in combination with some of the hydrophone (underwater microphone) recordings the ship has taken to illustrate a world in which we can explore the unseen and the undiscovered using audio data, similar to of bats and dolphins echolocating.

Like the R/V Falkor itself, most of the robots and boats on the ship all have names. The ROV’s name is SuBastian for example. The ship’s crew told me that it was odd that my robot did not have a name. Its name is now Xyvier, because it is an XY plotter bot. 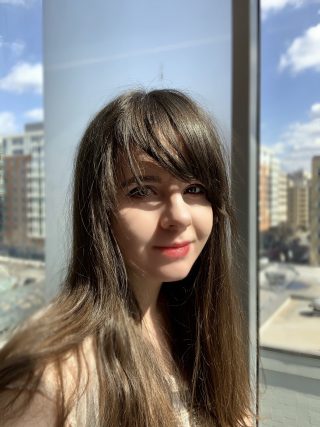