When I woke up on one of my first mornings aboard R/V Falkor, the sun was just rising and we were passing into the Sulu Sea through a strait between the islands of Borneo and Balabac. I held it together pretty capably at the time, but looking back, I’ll admit that this sent me into a quiet paroxysm of soaring romance. As I have mentioned before in these blog posts, this is my first time at sea, and before we left Vietnam, I had completely underestimated the overwhelming sensory phenomena that come with being somewhere where you can not perceive any land anywhere. Suddenly seeing an island out of my porthole was a weirdly moving experience. I ran up to the monkey deck to watch the rest of our passage through the strait from up there.

I have been wondering lately about how much of the way I have been feeling about the insane expansiveness of the ocean might be affected by the fact that I flew halfway around the world to get here. I am farther from my home continent than I’ve ever been, and I suspect that this has combined with the subsequent experience of traveling across the sea on this ship to give me a general sense – accurate or not – that the world is much smaller, more knowable, and more fragile than I’d always assumed.

The Size of the World

There is a gigantic world map on the wall when you first enter Falkor’s interior, and I have spent hours staring at it in the time since my arrival. It sounds funny to spell this out, but the world truly looks different when you suddenly start to think of the water as a means of traveling between places – or even as a place itself – rather than as a barrier that separates and defines them. The ocean may be vast and inhospitable, but nonetheless here we are, rolling and pitching our way across this small section of it. From that perspective, looking at this map from on board a ship with no land in sight, the whole world suddenly starts to seem like something one could realistically wrap one’s arms around.

There is something about being out here on top of all this water that feels utterly thrilling to me: we’re traveling from Nha Trang to Darwin, but there is nothing, really, between us and Nome. Or, for that matter, Cape Town, Oslo, Sao Paulo, Lisbon, St. Petersburg, or San Francisco. We could go from here to Mumbai or to Reykjavik, given unlimited time and resources, or even to Montreal, Chicago, or Duluth.  I have marveled before, standing at the edge of a driveway in New Hampshire, at the fact that it was connected to an effectively unbroken river of asphalt that linked that driveway to Oregon, Texas, Saskatchewan, Tijuana, Oklahoma, Florida and Nova Scotia. This is like that feeling, but on a ridiculously more massive scale, and I will confess that I had never really dwelled on it before I found myself on a ship in the middle of the ocean.

Even a slight awareness of the ocean’s vastness makes one feel very humbled to be floating along on its surface inside a comparably tiny metal contraption. “I never understand when people say they’ve conquered the Atlantic, or conquered the Pacific,” one of the deck officers confided to me the other day. “All it ever means, whenever you successfully make it through some bad weather, is that the ocean happened to permit you to survive this time.”

Several days ago, I was given a tour of Falkor‘s engine room by Rass, the chief engineer on this transit. Visually and aurally, it’s a pretty striking place. Two gigantic engines roared in the center; along the sides, brightly colored pipes carried oil, water, fuel, and more from one part of the ship to another; enormous generators howled.

We ducked into the control room and removed our ear protection. “It’s really a bit like running a city,” he explained to me as he showed me the walls of gauges that detailed the status of all these processes at various points throughout the chain. “For example, we need to supply our own electricity, deal with our own sewage, and process our own drinking water, in addition to doing everything that goes with simply making the ship move from place to place.”

I liked the idea of imagining the ship as a self-contained, floating city. Thinking about it later made it feel all the more extraordinary to lie in my berth at night and feel my whole body rock back and forth along with that whole city as it coursed forward through the endlessly shifting waves.

I’ve generated a handful of smaller pieces of music that will hopefully appear in this space before too long, but the main composition I’ve been focusing on is a piano piece whose structure is determined by a particular data set that Falkor records as it travels. Specifically, I have been interested in the discrepancy between the vessel’s speed through the water and its speed over ground: obviously, they are never quite the same, and the difference between them represents the mitigating influence of this enormous quantity of liquid that sits between us and the ocean floor. To try and capture something of this, in the piece, each of the pianist’s hands is mapped to the changing speeds represented by one of those two gauges. The result, I hope, is that what the listener will ultimately perceive is a shifting, undulating texture that will illustrate the influence of the ocean on the ship’s forward motion while also viscerally evoking the waves that have gently and regularly rocked the ship throughout this journey.

Another thing I have been struck by again and again in my time out here on the ocean has been the sensation of being surrounded simultaneously (and a little contradictorily) by both vast stillness and incessant motion. On one level, you can gaze in any direction and see what basically amounts to a Rothko painting: a flat, unchanging ocean beneath a wide and even sky. Look closer at that scene, however, and it’s clear that literally everything in it – including you – is moving constantly: clouds shift, colors change, the water subtly churns and heaves, and the ship itself plows forward. I have tried my best to illustrate this duality in the music I’ve been writing: in this piano piece, for instance, the harmonies are kept relatively broad and stable, in the hope that that will evoke some of that stillness, while the fluidly changing rhythms in which those harmonies are rendered will hopefully convey something of that constant, multi-faceted motion that we can see everywhere from out here.

The other night, someone noticed that the ship’s bulbous bow, just below the sea’s surface, was stimulating an array of bioluminescent phytoplankton as we moved forward through the dark water. Along with several others, I leaned over the bow to watch the water flicker brightly as it broke around the structure, illuminating and outlining it perfectly, before it all washed around to crash against the side of the ship and glow lightly in its wake. I hung my head over the gunwale and watched, entranced, for nearly an hour. While all this was going on, the stars began to come out overhead in quantities I have certainly never seen before, filling the sky to match the water. Someone noted that out here, far from any artificial light source, it always seems that if you look closely between any two stars, it turns out there are always another million to be found crammed into the tiniest of those spaces.

It has been a while since I felt a genuine sense of wonder, tininess, and fragility on the order of what I have experienced on this ship in moments like that one over the past couple of weeks, and those moments have turned 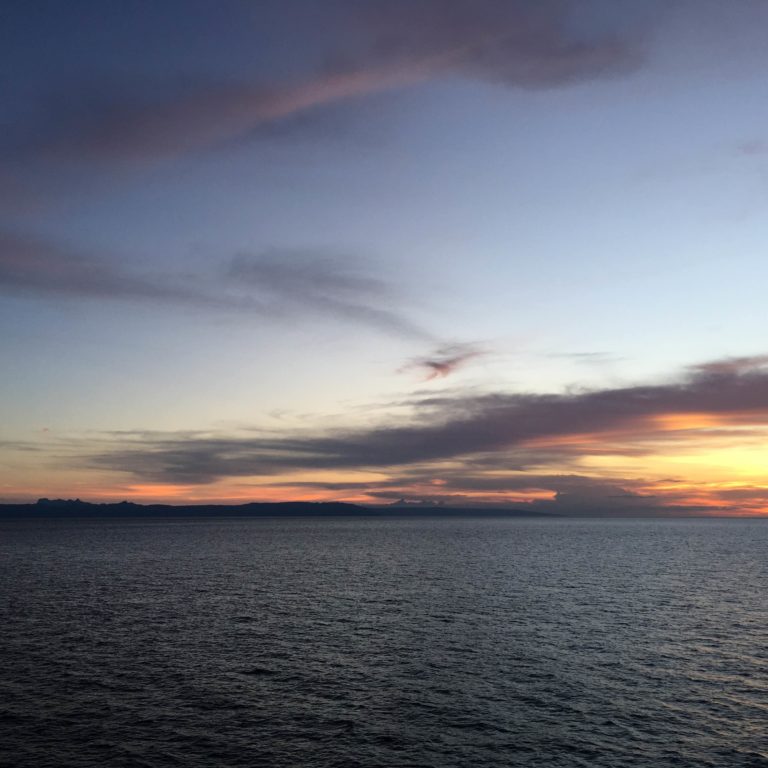 out to be startlingly numerous. I’m enormously grateful to Schmidt Ocean Institute for granting me this unique opportunity, and to the crew for being so consistently willing to welcome me into their lives on board over the last couple of weeks. I will miss this whole experience tremendously after I step back onto dry land, and I hope that between the music I have been working on and these little essays posted, the work I will be leaving behind is ultimately able to capture at least something of what this experience has been like.