Getting ready for the Artist-at-Sea Program

The days leading up to the voyage were filled with preparations, gathering supplies, ordering materials, and planning, but the real adventure began when I arrived in Guam. The crew ofFalkor went to great lengths to orient me to the ship, making sure all my needs were met and questions answered. Lead Marine Technician, Colleen Peters trained me in the proper procedure for taking water samples and pH readings. This will be an important part of my work on Falkor as this data will be used to create the art. We are using the recently installed Wendy Schmidt Ocean Health XPRIZE winning pH sensors to input into computer algorithms that will create new images based on the pH.

The next step was to set up the “darkroom” for processing my photographs. We selected the wet lab as an ideal location where light can be blocked, and I can work with the photos. I will be using the environment at sea to influence and mark the photos taken, however, I am not sure if I will be able to fully convey the bright, deep cobalt blue of the Pacific.

Preparing for the transit also involved safety drills in the event of a man overboard, fire, or full evacuation of the ship. Watching these drills made me feel very safe. It is good to know that there are trained medical personnel onboard. Even with all the activity, I was able to see a bit of Guam including many latte stones, which are the pillars of ancient houses and a signature of the Marianas Islands.

Falkor left Guam to transit to Honolulu in preparation for the first science cruise of 2016. I was able to capture many photographs and footage of our departure and took a good last look at land, as I knew it would be many days until I would see it again.

During this transit, myself and my two partner artists are on a mission to measure pH levels in this part of the Pacific and translate this data into visual art. Artist and scientist David Fries, Director of the Ecosystems Technology Group at the University of South Florida College of Marine Science, and Maurizio Martinucci, aka TeZ, an Italian multimedia artist and producer are my two partner artists. As we transit, the pH sensor data will drive our work feeding into a new incarnation of TeZ’s spontaneous, audiovisual light and sound piece, PLASM.

My role is to be physically present onboard the Falkor, creating artwork and collecting data for the team. I am capturing the experience digitally to document the transit, while using analog film to translate the unseen and often unpredictable forces of the sea. After the photos are captured, the roll of film is soaked in seawater allowing the natural elements and variations of salinity and pH to etch into the film, leaving unpredictable, spontaneous impressions. Check out my film tests for the Falkor transit with seawater in St. Petersburg, FL.

Ocean acidity is rising and I hope that the art and photographic images developed here, will help to galvanize the public. By sharing data in a new way, I aim to inspire people to care and take action. I am honored to be the first (non-crew member) artist onboard and excited about the upcoming Artist-at-Sea program.

I have been on the ship for a few days, and nothing can prepare a person for the experience of being at sea. I have now adjusted to the rolling of the ship, and have gotten my sea legs. I certainly picked the right time to sail on Falkor, as we crossed the International Date Line over Christmas. This meant that Christmas lasted two full days. The crew celebrated with a wonderful meal, and with such an international crew, many traditions were incorporated. I still can’t believe that I am working with the crew who, along with visiting scientists, discovered a new species of fish deep in the Mariana Trench, last year. I look forward to hearing the stories of the crew and translating their experiences in the art. 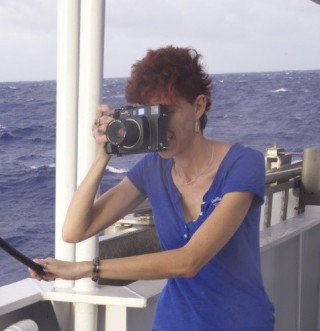