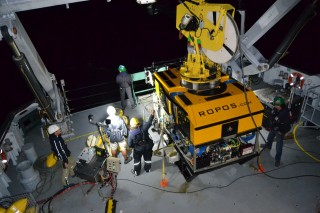 The Boston Globe has a new feature out about Schmidt Ocean Institute’s mission and founding. Though reading the full article requires a subscription, you can see the photo gallery here.

The article leads off with a look at the Axial Seamount expedition led by Julie Huber at the Marine Biological Laboratotry and the impressive work by the Falkor and ROPOS ROV teams: “…they were running out of time…a clearing in the weather provided a small window. Cramming 10 days of work into three, the Falkor crew scrambled, and, during one sleepless 24-hour period, got off four deep-sea dives with [the ROPOS ROV] and collected a trove of data from one of the most extreme environments on earth.”

The author also discusses the Oases 2013 expedition and 2014 plans then goes on to describe how our co-founders, Wendy and Eric Schmidt, are “committed to… protecting and exploring the environment,” and were inspired to create the institute after being “…struck by how little is known about the oceans, particularly super-deep environments that are simultaneously exotic and hostile.”